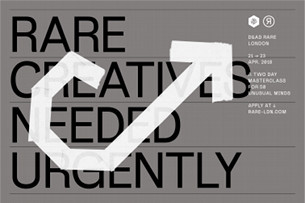 The statistics make a stark case in black and white. The creative and tech industries are far from diverse. In the advertising sector, only 12% of creative directors are female. Across design, the numbers run at about 11.5%. Look for BAME film directors and the figures are barely there, at 1.5%. The reality is creative and tech departments are a long way from diverse, which does not reflect the audiences we serve. Even when diversity is present, creative opportunities on the shop floor – and career progression – isn’t equal. Change needs to happen – faster. We need to act. Now. “Creativity should not just be the domain of the rich, male and white as true creativity happens when different people inspire and provoke each other,” states Nadya Powell, co-chair of RARE, and co-founder of Utopia.
Why RARE is launching during this week
RARE, a two-day masterclass programme - in collaboration with Google, D&AD and the Berlin School of Creative Leadership and co-chaired in London by Emily Kortlang, Laura Jordan-Bambach Mr President and Nadya Powell Utopia - is to land in London, April 21-23, and is throwing its doors open to all, including free scholarship places for those who need financial support, freelancers or creative talent returning coming back to the workplace. The programme is open to all diverse emerging leaders from film, fashion, arts, commercial design, products and services design, including in-house and design, brand, UX, creative tech and advertising agency talent.
‘We have to prevent talent dropping out’ – RARE founder, Stephanie DiGiavincenzo
Originally the brainchild of Australian founders Stefanie DiGianvincenzo, creative director at Clemenger BBDO and Tara McKenty, creative director, Google, RARE launched in Sydney last November – and plans to go global. “We saw unconscious bias, as well as feelings of vulnerability and marginalisation, were driving diverse talent out of the industry faster than we can draw them in. RARE equips underrepresented groups with the tools to deal with the issues they uniquely face, while arming them with world-class leadership training – ensuring they stay in the industry and help to lead it,” DiGianvincenzo says.
An A-list cast of trainers and creative leaders
To equip April’s cohort with know-how, networks and tools, the RARE has cherry-picked the industry’s top diverse creative talent who understand the challenges first-hand. The teaching line-up includes Oliver Pericovich, founder and Executive Director, Skateistan, Jenn Nkiru, award-winning visionary artist and director, from Peckham, London, Sulaiman Khan, CEO, ThisAbilityClub, and Nishma Robb, Head of Marketing at Google, plus Tea Uglow, Creative Director, Google’s Creative Lab, Sydney.
Proceeds from RARE go back into developing talent
‘It doesn’t stop there. RARE is about giving profits back to groups who are working in this space,’ says Jordan-Bambach. On the last day of RARE, there will be an art auction, where all proceeds will go towards funding bursaries for those facing financial or career challenges. The event is supported by Saatchi&Saatchi, 72andSunny, Havas, Sweetshop, Sample, Skateistan, Utopia, Mr President, Google and YouTube. "Diverse media starts with diverse creative leaders. It's those critical director level roles that will change the diversity story for the creative industry, creating role models, lighting up pathways and more importantly, curating creative work that represents the communities we serve. That’s RARE is a game-changer," says Nishma Robb, Marketing Director, Google.
Tim Lindsay, CEO of D&AD, sums it up. “The general lack of ethnic and demographic diversity in our business and the appalling lack of gender balance at senior levels in agency creative departments is becoming worse, not better. As our business becomes homogenised, whiter, more middle-class and male, we serve our clients less well and produce homogenised solutions. So, for the future of the business, we need shift the dial – bring on RARE.”
Are you a RARE creative looking to step up? Apply now RARE, April 21-23.
view more - Awards and Events