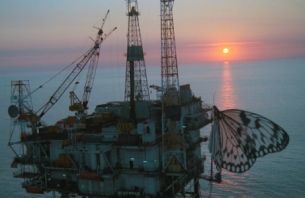 Coldplay’s surreal new music video is directed by PRETTYBIRD's Vania Heymann with his best friend director Gal Muggia.  Vania and Gal's friendship was borne out of mutual respect for each other's work. The video features Dali-esque dream sequences, flying turtles and a Lilliputian Chris Martin.  The pair dreamed up the initial idea for the interpretation of the Coldplay track at the end of last year: it took a couple of months for the band to really take on board what the creative was before they sprang on it. The video took 9 weeks from shoot to completion.

The promo for ‘Up&Up’ is the third track from Coldplay’s acclaimed new album ‘A Head Full of Dreams’  and has already had 16.8 million views on YouTube, with 3.3 million views in only 24 hours after it’s release.

Vania Heymann and Gal Muggia commented:  "All we can say is that it was a great honour and pleasure to create this video for Coldplay. On paper this concept felt abstract and unclear, so we would like to thank Coldplay for believing in our vision and running with it. We would really like to thank all of the wonderful and talented people who have worked so hard throughout this long journey. We were inspired by many collage artists, past and present. Hopefully the images do the rest of the talking."

Israeli director Vania Heymann came to prominence with his ground-breaking interactive video for Bob Dylan’s iconic track ‘Like a Rolling Stone’ (22.6 million views and counting), and his witty ‘Walking Contest’ film - both were featured in the Saatchi & Saatchi New Directors’ Showcase at Cannes Lions International Festival of Creativity in 2014.  Vania was one of 25 prestigious directors who created a short film for the  Saatchi & Saatchi 25x25 film which premiered at Cannes Lions in 2016 to mark a quarter century of the New Directors’ Showcase.