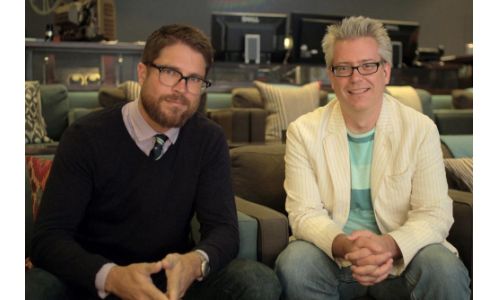 CINELICIOUS PICS is a newly launched distribution company bringing handpicked cinema to U.S. audiences for the first time via theatrical release, VOD, Blu-Ray & DVD and television. The company was inspired by a unique partnership between entrepreneur and film restoration expert Paul Korver and former head of film programming for the American Cinematheque, Dennis Bartok.

Cinelicious Pics’ key ingredients include an eclectic mix of new U.S. independent and foreign features and docs plus restored art house and cult classics, lovingly brought to pristine viewing quality by sister post & digital restoration studio Cinelicious, founded by Paul Korver. Both companies are located in the heart of Hollywood.

“We’re huge film enthusiasts, first and foremost, and have a deep appreciation for how challenging it can be to bring a unique film to a wider audience,” says Dennis Bartok. “Our goal is to present work that is compelling, thought-provoking and wildly entertaining. It isn’t genre or era specific; it’s about quality and films we truly love.”

“The hope is that people share our curatorial taste and become excited for what’s next. Like a film club brought to audiences wherever they consume content, including the beauty of a dark theater,” adds Paul Korver.

"CINELICIOUS PICS is the perfect home for GIUSEPPE MAKES A MOVIE!” comments director Adam Rifkin. “Paul and Dennis know and love cinema with a passion rarely seen these days, and their commitment to film preservation is truly inspiring. They've also created a safe haven for new filmmakers: an auteur-friendly environment that not only offers up a new and exciting destination for directors, but also embraces everything our movie is about.”

A fortuitous meeting of Bartok and Korver, and their mutual desire to expose quality films to larger audiences, resulted in the development of Cinelicious Pics. Each brings deep experience in various facets of the film industry to the company, which aligns film restoration and preservation with the discovery of compelling and original new voices in cinema.

For 13 years, Dennis Bartok served as head of film programming for the American Cinematheque, a non-profit film group that restored and operates the historic Egyptian Theatre in Hollywood. While there he organized landmark retrospectives on such filmmakers as Jean-Pierre Melville, Mario Bava, Kinji Fukasaku, Anthony Mann, Samuel Fuller, the Monty Python group and many others. Additionally, he produced & programmed the 3rd edition of the World 3-D Film Expo last September. Bartok is also a screenwriter and founder of Five Windows Productions, which released, through Lions Gate, the anthology horror film TRAPPED ASHES with episodes directed by Joe Dante, Ken Russell, Sean Cunningham, Monte Hellman, and John Gaeta. Dennis serves as EVP of Acquisitions and Distribution at Cinelicious Pics.

Paul Korver is a filmmaker and entrepreneur who, in 2008, founded Cinelicious, a creative studio that offers forward-thinking, talent-driven post in an inspired environment that caters to a new generation of filmmakers, ad agencies, studios and clients. Korver based Cinelicious on his notorious love of celluloid film, passion for cinematography and eye for creative talent. Cinelicious is a filmmaker’s playground that boasts a 4K pipeline with the latest 4K film scanning technology as well as a stunning 4K DI Theater, which allows for real-time 4K color grading review and mastering. The company has provided post services for Michael Tully’s PING PONG SUMMER, Richard Linklater's BOYHOOD, and Jeff Preiss’ LOW DOWN, David Gordon Green's PRINCE AVALANCHE, remastering for the television series DEATH VALLEY DAYS, the 4K remaster of Chris Nolan’s FOLLOWING put out by Criterion, the student films of animation masters in conjunction with the Academy of Motion Pictures Arts & Sciences, and many more. Korver is acting President and CEO of the new distribution shingle.