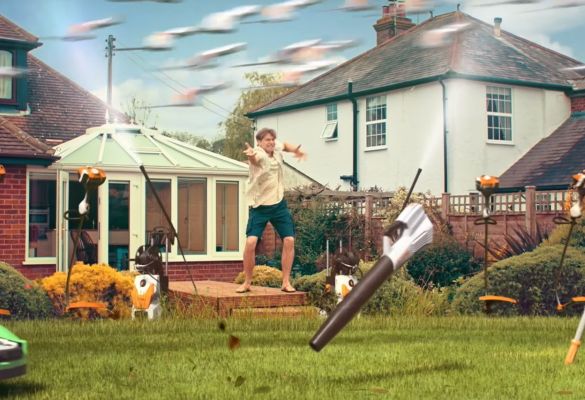 Despite being one of the leading manufacturers of garden power tools in the world, as well as the company responsible for the world’s first petrol chainsaw, STIHL have never before released a national television advert in the UK. This has changed with a new film by BWP Group, directed by Duncan Guymer.

The campaign highlights the breadth and depth of the STIHL tool range, which features everything from hedge trimmers and axes to robotic mowers and, of course, chainsaws make an appearance as well.

Inspired by The Sorcerer’s Apprentice, the film features a younger, apprehensive character, faced with the job of tackling an overgrown garden by his seasoned mentor. His solution? Dramatically conducting enchanted STIHL tools to do the job for him, highlighting how there is a tool for every purpose available, and how they make gardening so easy, it might as well be magic.

Rod Kavanagh, Creative Director at BWP commented: “Our main focus when creating this film was emotion. We wanted something that would make people smile, partly through memories of a famous mouse and a chaotic mop, while also showing that it’s possible to get professional results in the garden no matter what ability you possess. It’s not all about selling, it’s about making people want to buy. It’s a fine but important distinction. We wanted consumers to feel something.”

Head of Marketing for STIHL GB, Simon Hewitt, also noted: “For over 90 years, STIHL has been one of the market leaders in the garden power tool world, particularly amongst professionals – the big challenge for us is raising awareness of the brand as a genuine domestic product with consumers on the widest scale. I’m delighted with the campaign and I’m sure we’ll have a new army of STIHL fans very soon!”

The integrated campaign is hitting screens with a combination of impactful 60-second hero spots across Channel 4/UKTV and sponsorship idents across 4 UKTV channels (W, Drama, Eden & Yesterday) for five months.