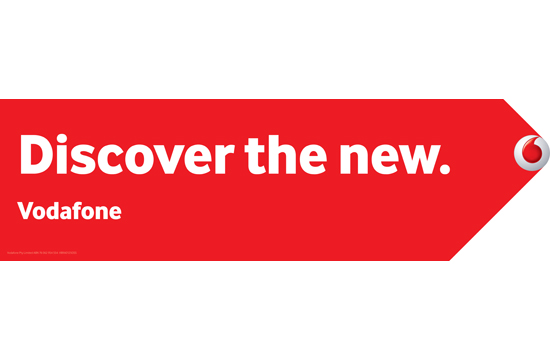 Vodafone Australia is today launching a multi-million dollar campaign as the first Vodafone market globally to unveil a new visual brand identity for the iconic brand.

Vodafone’s look and feel is being refreshed in its retail stores, online and in catalogue, supported by an outdoor campaign and television commercials, as part of a campaign spanning several months.

This is the first comprehensive campaign Vodafone has undertaken in several years, off the back of a 18-month period which has seen major network investment, including the rebuild of its 3G network, rolling out a brand-new 3G+ network, significant expansion across regional Australia and the launch of its superfast 4G network in June.

Last week the brand launched its flagship Vodafone Red postpaid and SIM-only products, which offer infinite standard national calls and texts, generous data inclusions, a market-leading roaming offer to the US, UK and NZ, and priority service from its Australian call centre.

“Our Discover the New campaign aims to reintroduce Vodafone as a brand that encourages people to see the world as though seeing it for the first time. Our customers are fun-loving, adventurous types who haven’t forgotten what it’s like to view the world through the eyes of a child.”

Internationally, The Brand Union agency has led the development of the core brand identity, which replaces the Vodafone “tetris” with a flexible rhombus shape that anchors to the Vodafone roundel

Locally, Vodafone has worked with its agency Ogilvy under the direction of Steve Back, to produce a campaign that is brave, bold – and holds yet a few surprises in store.

The launch of the campaign today will see outdoor ads across Australian capital cities featuring the new visual identity and inviting customers to “Discover the New” (see below). A second, cheekier version reads “Pleased to meet you. Again”, asking the public to reappraise the brand in light of the significant improvements it has made across all areas of its business in recent years.

Kim Clarke says she is excited to be launching a comprehensive campaign that will be unveiled over several weeks.

“This is a bold campaign that doesn’t shy away from asking ex-customers – many of them now not feeling quite at home with our competitors – to reconsider Vodafone,” said Clarke.

“We are light years away from where our brand was sitting a few years ago and we can feel it internally, we hear it from our customers who have noticed the improvements we’ve made to our network and customer services and there has been an extremely encouraging response from customers and non-customers alike for our 4G network, which offers among the fastest data speeds in the country.”

“I strongly feel it is the right time for Vodafone to be bold, be brave and be straight up in asking customers to reappraise our brand. These are the values we hold true as a company and reflect those of our customers, who look at the world with fresh eyes. We want to attract their attention and to discover the new Vodafone.”

Vodafone says its new TVC will be launched in the coming weeks with more outdoor advertising and a new web portal to follow.

Bohemia:  responsible for strategic planning and idea development across all media channels.

Ikon: responsible for media planning & buying across both online and offline including search.

Below: The first billboard ads that will appear as part of the campaign