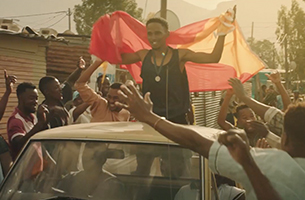 The E-commerce giant, Alibaba Group, has partnered with the winter Olympic Games in PyeongChong 2018, and for the subsequent 11 whopping years. The aim of the campaign is to encourage small business using the platform to follow their dreams and think big.

Shot over the course of five days in South Africa and Slovakia by frequent collaborator, DOP Manuel Kadosh, the campaign reveals Eli’s stylistic and aesthetic diversity. Unlike some of Eli’s other well-known, playful and colourful campaigns, “The Greatness of Small” campaign takes a more cinematic, human, and story-driven view of the underdog in the world of sport.

Alongside the campaign headline ‘Manifesto Film’, two narrative films were created based on real life events. The first of which is a dialogue driven story of a young Kenyan ice hockey team, determined to one day play on ice at an international level. The second narrative film tells the true story of an Australian rower Bobby Pearce who stopped during an Olympic rowing race in 1928 to make-way for a family of ducks who were directly in front of him, jeopardising his chances of Olympic gold. Miraculously, having waited for the ducks to pass Bobby still managed to win the race and the gold. Hero.

Together, the three films have appeared across China, Korea, Japan and the USA. They have racked up an enormous 800 million online views and counting.