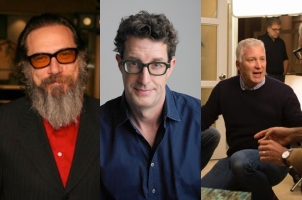 Production company Bullitt has announced that directors Larry Charles, Scot Armstrong, and Tristram Shapeero have joined the filmmakers’ collective. Charles, Armstrong and Shapeero unite with Bullitt’s roster of unique storytellers in brand-integrated entertainment and advertising content for screens large and small, including VR and other interactive experiences.

“Bullitt is a filmmakers’ collective and this foundation is what brings together directors like Larry, Scot and Tristram,” comments Russo Brothers’ Joe Russo, Co-Founder of Bullitt. “They are masters of the craft and infuse each project with an intense dedication to entertainment.”

“We believe the development of branded projects is enhanced by directors who work across all media and genres. Every project is seen as the opportunity to make something exciting to experience, something people want to engage in,” agrees Bullitt Co-Founder Anthony Russo. “Larry, Scot and Tristram all share this passion and perspective.”

Larry Charles is an award-winning writer, director, and producer whose feature directing credits include Borat, Religulous, Brüno, and the The Dictator. As a writer on Seinfeld, he became known for many of the popular show’s most absurd storylines. He also lent his darkly comic perspective as a director on Curb Your Enthusiasm. In the advertising realm Charles is known for directing commercial campaigns for Corona and Pringles, among others. Charles’ new film, Army of One, based on the true story of an American Construction worker who travels to Pakistan with only a sword to hunt down Osama Bin Ladin, releases later this year and stars Nicolas Cage, Wendi McLendon-Covey, Rainn Wilson, and Russell Brand.

A former creative at W&K Portland, Scot Armstrong is the director of the upcoming feature film Search Party and is the creator, show runner and director of Showtime's half-hour comedy DICE. As a screenwriter, Armstrong is credited on Old School, The Hangover Part II, Road Trip, Starsky & Hutch, Heartbreak Kid and Semi Pro, among others. Armstrong studied improvisational comedy under Del Close, and has been performing as part of the Upright Citizens Brigade Theater in both New York and LA since the theater's inception. Next up Scot is slated to direct the Sony comedy Fired & Expelled and produce the independent films The All American, The Coward and Finding My Father Sylvester Stallone.

Tristram Shapeero is a British television director who burst onto the US comedy directing scene in 2010. He is currently Executive Producing his second season of Starz' Blunt Talk after having directed the pilot. Additionally, he directed the pilot and subsequent episodes for both seasons of Netflix's Unbreakable Kimmy Schmidt. Tristram's other credits include 2 seasons as Producer/Director of Community (he directed 24 episodes of the series in total), as well as episodes of Veep, Parks and Recreation, Nurse Jackie,Workaholics, Happy Endings, New Girl, Bored to Death, and Children's Hospital. He was the pilot/series/specials director for every episode of the BAFTA nominated UK series, Pulling. He also directed Season 2 of I'm Alan Partridge, directed every episode of Green Wing, and reconceptualized and directed every episode of seasons 2 & 3 of Peep Show. His commercial credits include a collaboration with Joel McHale on the branded web series The Klondike Celebrity Challenge. He has been BAFTA nominated eight times in the situation comedy category.