Trends and Insight 589 Add to collection 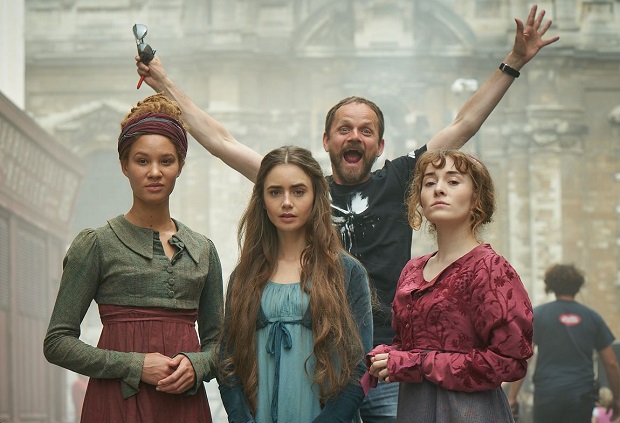 This month saw director Tom Shankland’s epic six-part BBC adaptation of Les Misérables draw to a close. Featuring an all-star cast including Olivia Colman, Lily Collins, Dominic West, and David Oyelowo, the songless adaptation breathes fresh contemporary relevance into the 19th century tale. No stranger to painting vivid worlds and bringing timeless stories and characters to life, Tom is responsible for directing high-profile feature films and series such as The Punisher, House of Cards, Luke Cage, The Missing, and WΔZ.

In this interview, the director, who is represented by Great Guns for branded content, reveals how he and his committed cast conquered a myriad of challenges to bring the colossal project to life, and how he changes gears from sledgehammer gore to period masterpiece.

Q> Your most recent work - the BBC adaptation of Les Misérables - stars an impressive British cast including Olivia Colman, David Oyelowo, Lily Collins and Dominic West. What was it like working with them?

Tom> Victor Hugo’s story features some of the most iconic characters in literary history. I always wanted our version to dig deep into what made these characters tick, whilst also making their world feel as viscerally real as possible. I didn’t want anything too stately or ‘chocolate-box’-y, it absolutely had to have grit and soul - something only possible with a cast who were prepared to go to some extreme places.

I vividly remember filming the sewer scenes on a freezing night in Belgium; Dominic West [playing Jean Valjean] hurling himself into the mud, rain and river, whilst carrying Josh O'Connor [playing Marius Pontmercy] on his back. They were a tough couple of days but Dominic looked so epic in those shots.

Similarly, Lily Collins [Fantine] told me that she was really up for being pushed - words every director loves to hear! With that instruction, as soon as she arrived from sunny California to our -10℃ set, I had the location staff switch off every heater in Fantine’s set so Lily would really feel the cold and the camera could pick up her breath.

Olivia Colman [Madame Thenardier], one of the loveliest people in the world, was virtually in tears every time she had to do a scene where she beat Cosette. Whereas Lia Giovanelli, who played little Cosette, loved every minute!

Every actor dug incredibly deep every day and I marvelled at the way they shed all ego and completely disappeared into their characters and the world we were creating. They were the best bunch of people to have alongside you; I really could not have hoped for more from everyone who came on this adventure. 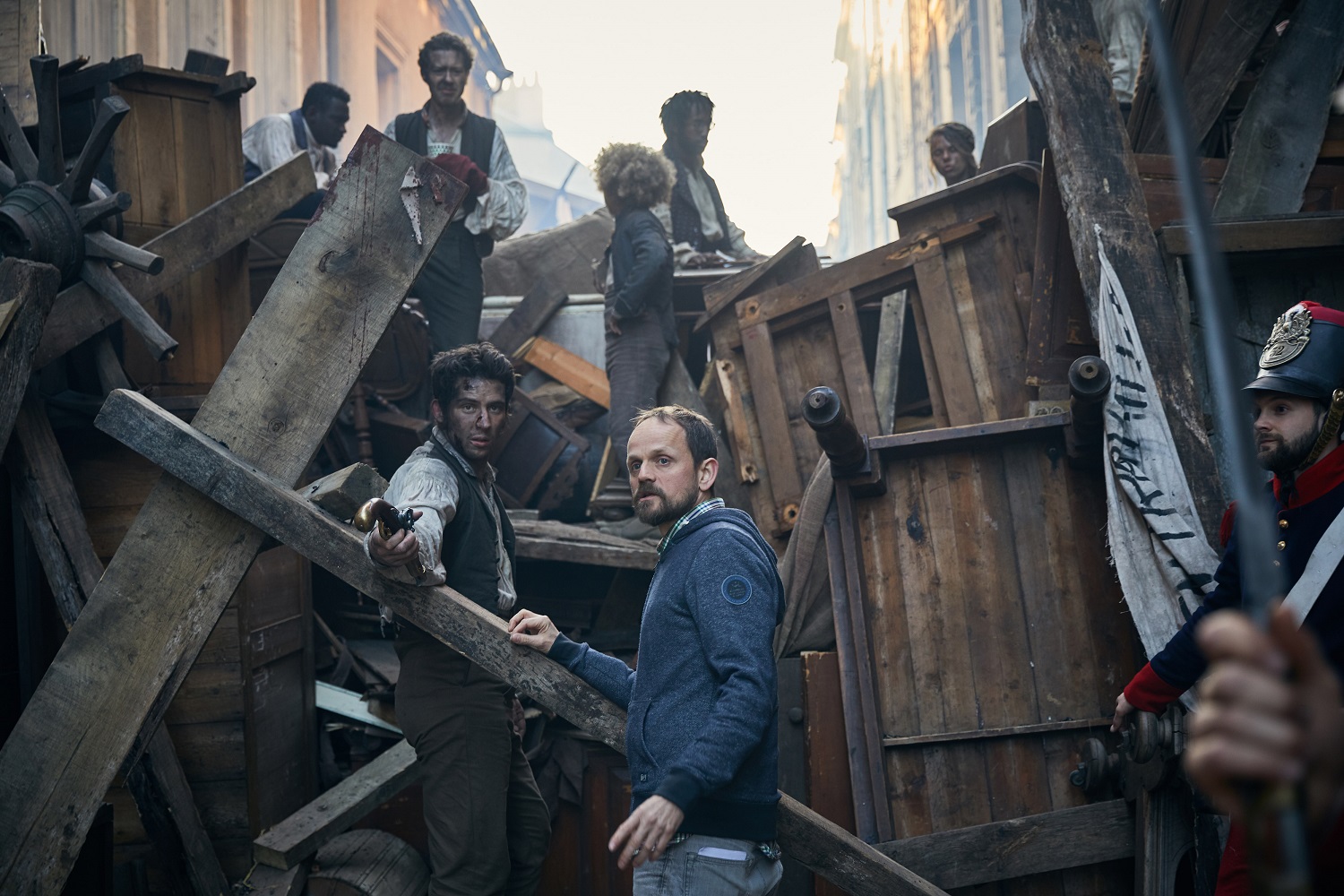 Tom: "Me and Josh O’Connor talking heroics or the lunch menu - I forget"

Q> This was a huge production with so many different variables. Did you encounter any interesting challenges during the process?

Tom> There were many, many challenges of shooting Les Misérables: the battles to protect the resources for the epic revolutionary scenes; coping with a monsoon storm in the middle of the day when shooting the Waterloo sequence; figuring out a way to write into the narrative a reason why our Enjolras had a hand injury when the actor, Joseph Quinn, arrived on set having nearly lost his finger the week before, to name a few.

Generally, I like to think that we found ways to overcome and even make virtue of some of the challenges. I love the shots of the rain at Waterloo that the editor worked into the sequence and how we gave Enjolras a heroic side story to explain his injured hand. There was one day I remember though (with a slight shudder), where we couldn’t find a way around it. The little girl playing child Éponine just could not be persuaded to come to the green room to be filmed running around a tree, no matter what we tried. A brilliant little actress and truly such a sweet girl - it was just one of the days you can have as a six-year-old. We lost half a day’s filming and a massively important scene lay unfinished. Thankfully, two days later she was far jollier and the scene was completed - happy days! That was definitely the day I heard the First AD muttering 'Happy place! Happy place!' under his breath. All you can do in moments like that is be Zen. 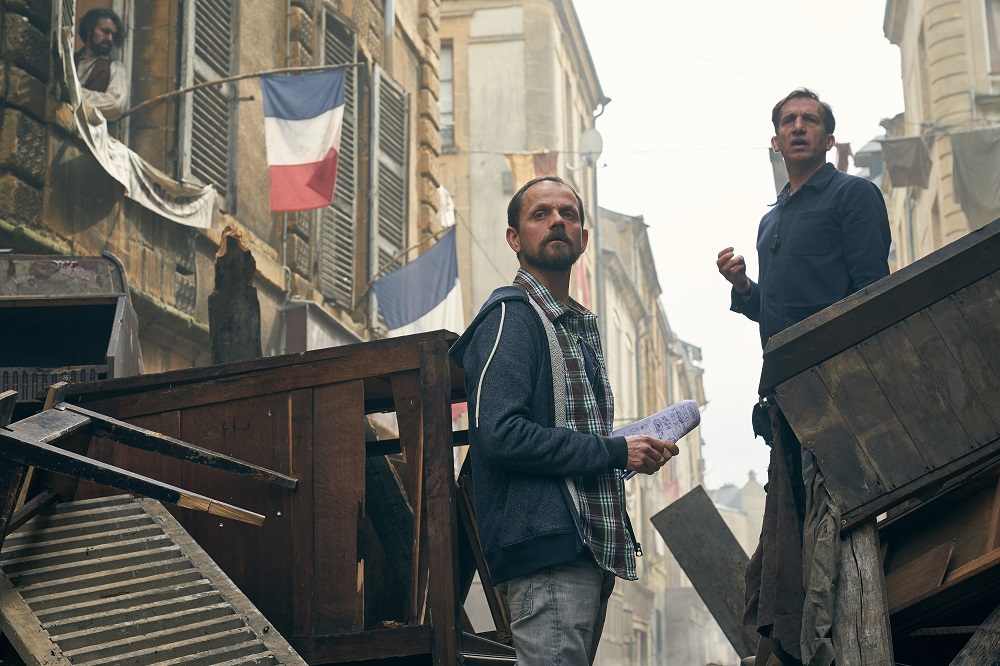 Tom: "The barricades: me on the left - the first AD on the right trying to go to his ‘happy place’".

Q> You’ve directed shows such as Marvel’s The Punisher, chilling-murder mystery The Missing and now Franco-period drama Les Misérables. How do you transition between such vastly different genres?

Tom> I love directing different types of material; partly to push myself as a director and also because I love being a perpetual film student. Fundamentally I ask the same questions of the material: how do I make this moment convincing; how can I make the audience care about the hero; what’s the most cinematic way to build this character’s world; where is the tension in this scene; and what am I trying to say? In that sense, it feels easy to move from one genre to another because the most important questions are always the same.

In some ways, the differences between The Punisher and Les Miserables are only superficial. The audience who love The Punisher want Frank Castle to explode into brutal action at some point but when Valjean unleashes hell in Les Misérables, I would be less likely to go in for big close-ups - whereas The Punisher fans would be furious if they didn’t see the gory results of a sledgehammer attack! 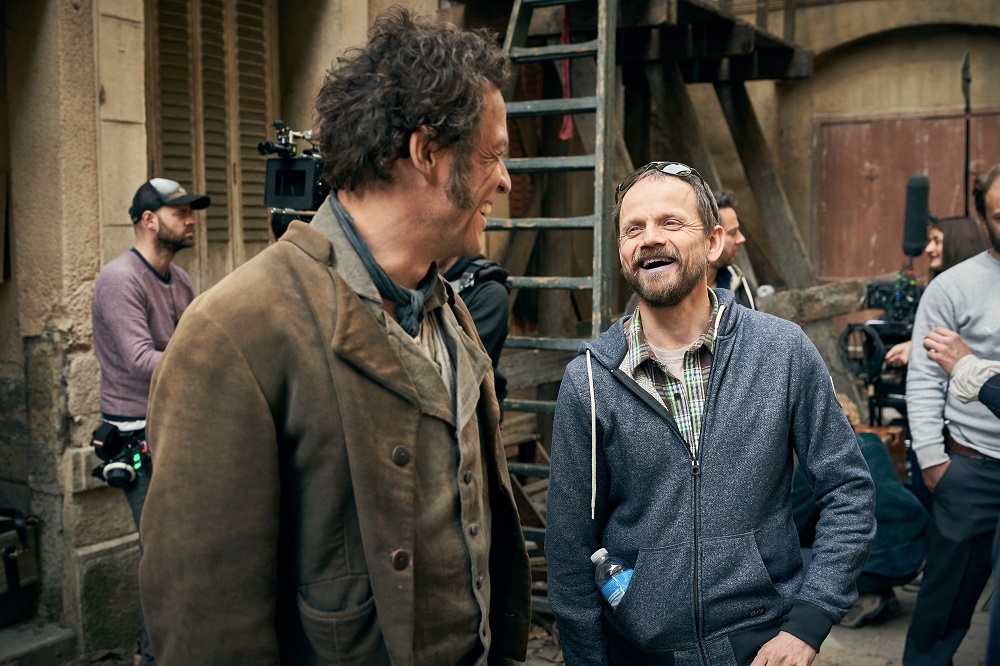 Tom: "Me and Dom - never Misérables behind the camera!"

Q> You’re represented by Great Guns for branded content. What are the benefits of production company representation as an established industry figure?

Tom> I love being represented by Great Guns because, for me, it’s important to be somewhere where the people know much more about short-form filmmaking than me! I can bring my point of view and filmmaking experience but I love working with people who can help me be very forensic about every detail in a frame - something that is absolutely crucial for short-form. I love this medium, and like all filmmaking adventures, you need the right gang around you. I do wish the auteur theory was entirely true, but, alas, it’s only partially true.

Q> What has changed most in the industry since your debut?

Tom> At film school, me and most of my fellow film school brats wanted to go out and make indie films; TV didn’t seem like a very exciting place for a filmmaker to express themselves. High-end commercials seemed exciting and exotic with their vast budgets and such opportunity to express cinematic flair. They also had a great track record of supplying visually interesting directors to Hollywood, of course.

Cut to the present and these days a ‘commercial’ could be a ten-minute slice of somebody’s life shot on a smart-phone; bingeing a great TV series could be much more artistically and narratively fulfilling than 10 trips to the cinema; and maybe the best film of the year, Roma, was made for Netflix!

All of these changes are revolutionary and a massive tectonic shift for all three industries. I’m sure there are downsides too but I’m a glass half-full kind of person; I tend to think all these changes open up lots of new possibilities for different kinds of storytelling. 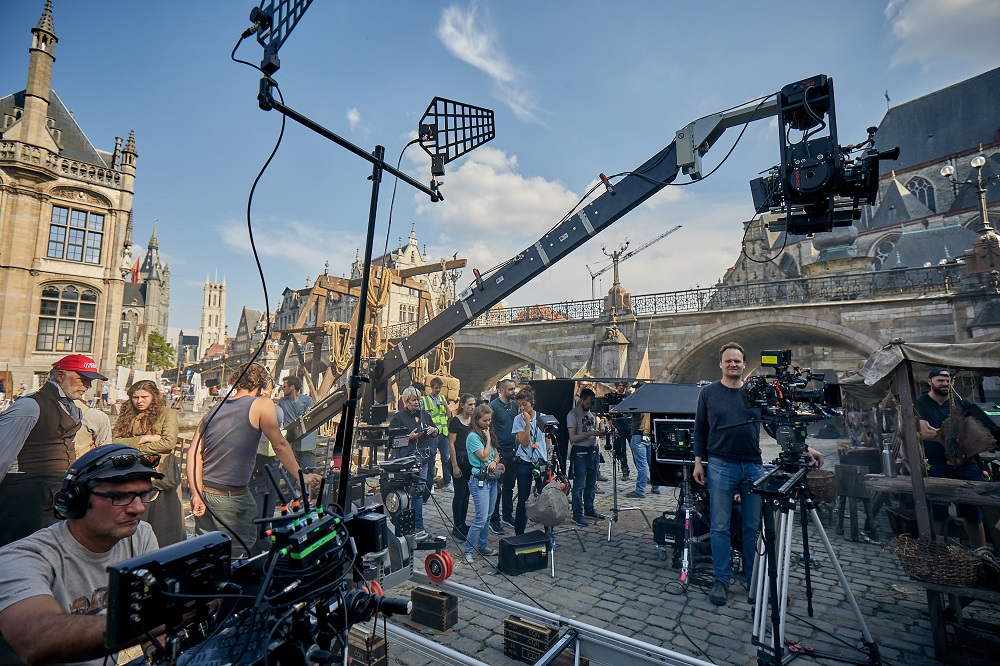 Tom: "Something big going on in Ghent..."

Q> Between genres, periods, and styles, you’ve built up a versatile portfolio... Where do you draw inspiration from?

Tom> I’ve been very lucky to have had the chance to work across very different genres; a conscious quest I’ve been on since film school. I arrived at National Film and Television School obsessed with Ingmar Bergman and convinced that I was going to be a writer-director of angst ridden art films. Yet somehow, I ended up leaving film school having made a super-violent five-minute horror film and a ‘true crime’ murder story as my graduation film - both of which got me lots of attention and interest. I did get to do my ‘personal’ film in the second year and it was absolutely one of the least successful things I’ve ever done; whereas the filmmaking in the two-genre shorts was much better (and confusingly, felt more personal).

This got me thinking about my childhood love of Westerns, musicals, thrillers, comedies, and classic Golden Age Hollywood entertainment made by directors like Howard Hawks and Billy Wilder, who jumped between genres all the time. You can see and feel the personalities of these directors in each of those different styles, even though their agenda was just to entertain the audience. I really think there is something liberating and joyous about not trying too hard to be self-consciously personal.

To be frank, I love losing myself in whatever story I am telling. Wherever you go, there you are... 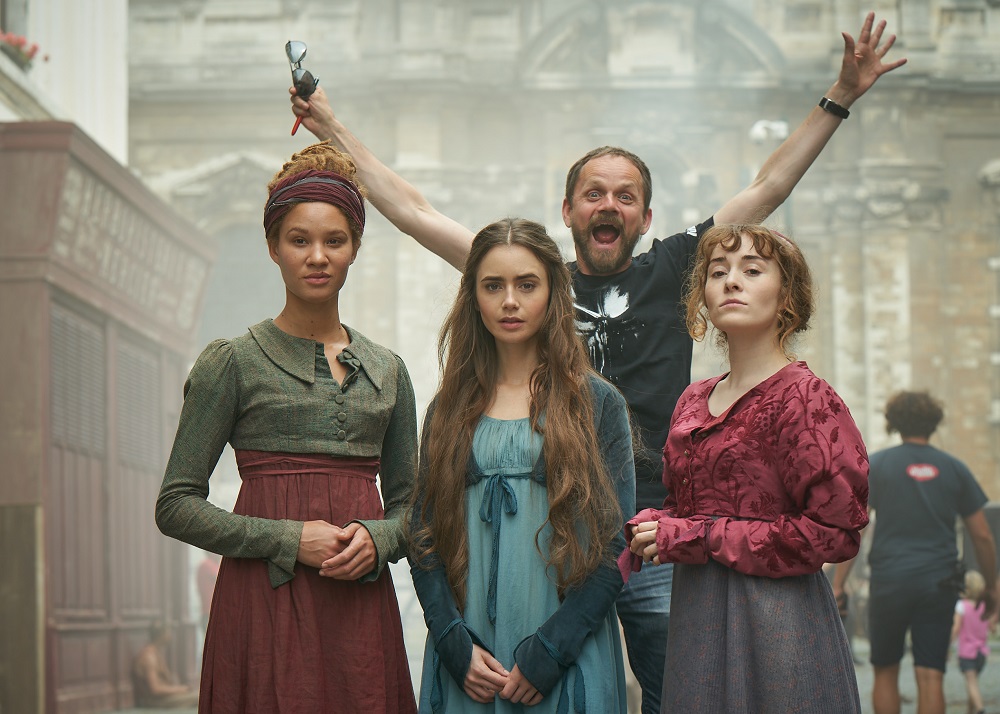