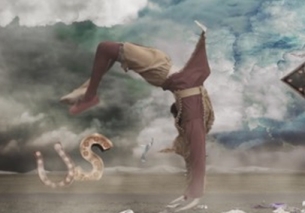 Shelly Love is a director who transports you to another world. Her imaginative and theatrical storytelling is beautifully realised, and visual design and effects company, Three Wise Monkeys, have partnered with Love on her latest magical fantasy work for The National Centre for Circus Arts, London, funded by The Arts Council of England.

The Fallen Circus is the first chapter of a developing longer film following on from the success of Love’s The Forgotten Circus which has had 3 million views and submissions to 350 art, film, dance & cross disciplinary festivals worldwide.

Three Wise Monkeys graded, mastered, managed and communicated with production & post-production partners for a safe delivery of the short film. Backgrounds generated as matte paintings were developed with concept and matte painting artists Zeroh. Brian King developed the desaturated and distorted hue feel for the grade, bringing the layers of the composite together with added animated sparkle, cloud overlays, mist and smoke to create an otherworldly feel to the film. The viewer is taken on a journey that is textural and elegantly choreographed in the unique style that Love is known for.

Carl Grinter says, “We love working with Shelly, she is a great visual storyteller who loves to push into the realms of the fantastical whilst keeping a feel of realism and dynamism to everything and allowing a freedom for experimentation, which is great for visual design and effects based work. This recipe produces unique work like The Fallen Circus and her earlier film The Forgotten Circus which is the reason we love turning up for work every day!”