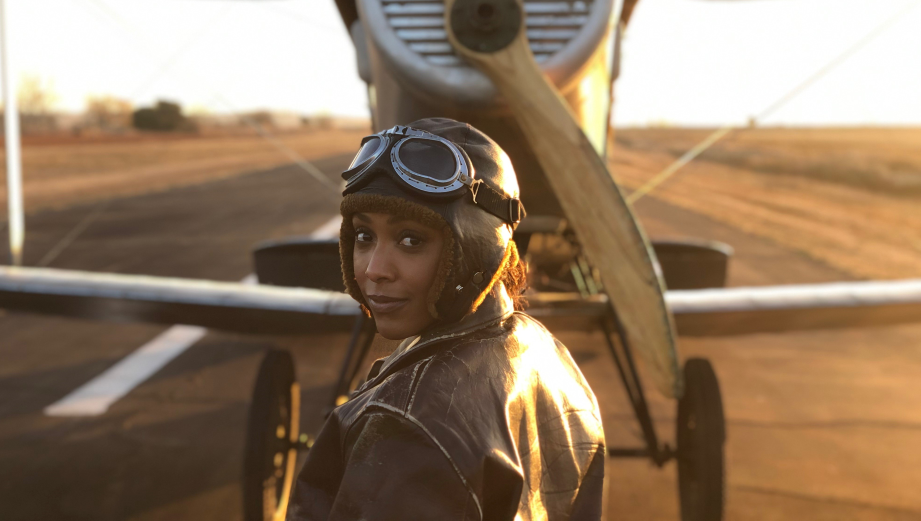 The uplifting and inspiring true story of Bessie Coleman, whose pioneering achievements behind the pilot’s stick of a Jenny biplane early in the 1920s led to the creation of the flight school that in turn inspired the Tuskegee Airmen, has been told in a short film that just broke on the Netflix Film Club YouTube channel, presented in association with Film Independent.

Written, produced and directed by Sheldon Candis, the short, 'Queen Bess: Allegory Ascension of An Auspicious Aviatrix', is based on the true story of Coleman’s life and untimely demise in a crash back in 1926. Accompanied by the poetic voiceover of 'Impressions of a Pilot', by Gary Claud Stokor, the film was shot by director of photography Philipp Friesenbichler. It was produced by Candis’ production company, Cinephile Society, and produced by Chelsea Davenport. Original music was provided by The Echo Society.

“If you looked up in the air a hundred years ago, you would have seen something that would have blown your mind,” says Candis about his story’s heroine. “It was the first African American aviatrix. She was an Evel Knievel of the sky, like the world had never witnessed before. In making this film, I wanted to honor her life and captivate the audience by putting them right in the cockpit with her,” he explains, “giving them that exhilarating experience of flight.”

Working with Moscow based VFX studio Avocado Toast and visual effects producer Denis Astakhov, the film was shot on location at Vintage Aircraft Company in Northern California, where Candis and his crew located an antique Jenny biplane. With actress Meagan Holder commanding the role of Bessie, Candis captured the flying scenes there before going into post to create the aerial composites. He proudly points out the diversity of the multinational crew he assembled to create 'Queen Bess', with Friesenbichler, his DP, hailing from Austria, and his editor, Kristin Yawata of Little Farm, who’s Asian American.

'Queen Bess' is one of five films commissioned by Netflix and Film Independent as a way to support filmmakers from diverse cultural backgrounds, inspiring and empowering them to tell their stories amidst a pandemic and a period of social unrest. In addition to 'Queen Bess', the other titles include Ellie Foumbi’s 'Home', Nijla Mu’min’s 'Black Prom', Frederick Thornton’s 'Injustice System' and Jarrett Lee Conaway’s 'My Brother Jesus'. They began rolling out in February, in recognition of Black History Month.

Candis has been fascinated by Coleman’s story since he first learned about her during a conversation with SAG Indie executive director Darrien Gipson, and he brought this passion for sharing her tale of courage and perseverance to the project. A manicurist in a salon in Chicago, Coleman was barred entry to flying schools in the US because of her race and gender, so she travelled to Paris and learned to fly there. Upon her return to the States she took to the barnstorming circuit, becoming a major attraction and drawing huge crowds. As “Queen Bess” closes, a title card reveals that, while Coleman’s dream of opening a flight school for African American pilots did not come true during her lifetime, it eventually did so. The Bessie Coleman Aero Club went on to inspire many outstanding Black pilots, including the Tuskegee Airmen of World War II.

Candis sees the Netflix Strong Black Lead series, of which this film is a part, as a program designed to spotlight and uplift Black filmmakers, giving them an opportunity to tell stories that are relevant not just to Black audiences, but to the entire Netflix community. Executive Producer Qadree Holmes, whose company, Quriosity Productions, represents Candis for advertising and branded content assignments, would agree. “Netflix went out and there and found a group of amazing filmmakers who you may not be aware of but should be, and their storytelling power is universal,” he says.

“I think what’s key for agencies and brands here is that Sheldon was able to capture the heart, the emotion and the power of this woman in the short form, and did so in a captivating way while working with a limited budget,” Holmes adds. “It’s a testament to his creativity and his skill as a filmmaker that he was able to steer this project through to completion.”

For Candis, what’s as important is that the films in this series are not just examples of “African American directors telling our own stories, but also showing that, while our collective cultural narrative is specific, it’s equally universal and thematically inviting for all audiences,” he notes. “My main drive as a storyteller is to communicate matters of the head and heart in a cinematic and viscerally emotional way. I’m driving the nail on ‘meeting people where they’re at,’ and celebrating their human condition.”

Shooting “Queen Bess” kicked off a particularly busy season for the director. He recently wrapped commercial assignments for Walmart and Microsoft, and is currently directing on the limited narrative series “Colin in Black & White,” with Executive Producer and Director Ava DuVernay, for ARRAY and Netflix.