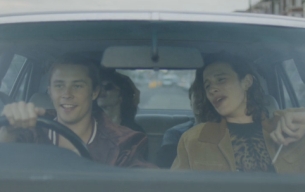 Short-film, ‘Dreamlands’, directed and co-written by Rattling Stick’s Sara Dunlop has been selected for inclusion in this year’s esteemed Cannes Film Festival and is the only UK film to have made the final ten, out of the total 5008 global films entered.

The film, set on the run down coast of Kent, explores the time of life between being a child and being an adult.  Sara comments, "I’ve always had a fascination with what that time in your life feels like. It’s a beautiful time and I wanted to make a film that was beautiful but that also dealt with the problems of being a teenager, particularly now. Young people are so exposed to sex these days - online, through social media - and there’s huge pressure on them to be more sexually explicit in their actions. I wanted to explore what effect that could have, so I came up with this imaginary scenario of a teenage dogging scene in a dead end seaside town."

Dreamlands is a coming of age story which is both unique and hauntingly familiar. At its heart is 17 year old Pixie, a tough-talking, wild and beautiful hedonist, whose routine world get’s turned upside down by the arrival of an unfamiliar young boy.

The 69th Festival de Cannes (International Film Festival) will take place from 11 to 22 May 2016.