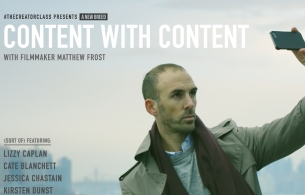 Documentary 'A NEW BREED: Content with Content' features Matthew Frost, a web famous filmmaker with a knack for satirizing our content-obsessed culture through poignant short films starring A-list actresses. Matthew’s distinct brand of satire has earned him Vimeo Staff Picks, hundreds of thousands of views, and the affection of the media and fashion industry.

Directed by Paul Johnston and Adam Beck, Content with Content turns the camera around, as Matthew Frost plays Matthew Frost in this self-aware doc about filmmaking in a celebrity-saturated internet age. Peer into Matthew’s daily life and learn about a creative process that blends the efficiency of a commercial film with a sense of humor in a world that takes itself too seriously. Beyond all else, learn from a Creator who has made lightning strike again and again with a viral, modern-day genre all it’s own.