Director Joshua Osborne on Diving into Music Promos with Amane 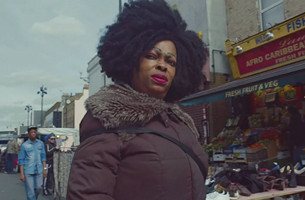 Joshua Osborne has thus far been cutting his teeth in the realm of short films - both branded and off his own back. Last week, though, the young director’s first ever music promo dropped, created for London-based artist Amane. ‘The Swan With Two Necks’ features choreographer Theo Lowe jiving through Deptford High Street, highlighting Joshua’s knack of capturing those last remaining ‘real’ gems of London, as he also did in previous films ‘Young Dads’ and ‘Earlsfield ABC’. LBB’s Addison Capper chatted with Joshua to see how he found his debut promo experience.

LBB> This is your first promo - how was the experience for you? What did you enjoy about the experience? Were there any noticeably tricker factors compared to shooting a short film / ad?

JO> It felt like a long time coming! Music has always played an important part in my films so it was quite refreshing to create something exclusively for an artist. I enjoyed the process of listening to the track for the first couple of times and beginning to visualise potential ideas based around what I was hearing.

LBB> Tell us a bit about the concept… what inspired it?

JO> I think the track is about a relationship between a person and their neighbourhood so I wanted to explore that through physical movement and surroundings. The concept is a portrait of this man and his local area, and it shows the differences between them but also how they can interact. He appears very lost but at the same time connected to his surroundings.

LBB> Who’s the dancer in the video? Did he need much direction or was he a bit of a free spirit? What kind of conversations were you having with him?

JO> Our main character is the hugely talented choreographer Theo Lowe. I've known him personally for many years now and have always been keen to work with him. This project seemed the perfect fit.

He is very much a free spirit as you can see through his movement. The only direction I was giving him was about pace. I wanted there to be a build up throughout the track so we rehearsed it prior to the shoot, making sure the timings and flow were just right.

When he is introduced his movements are very minimal compared to the end scene where his body is moving erratically.

LBB> Where did you shoot?

JO> We shot in three different locations. The opening sequence was all shot in Moorgate. I wanted to begin the video with high-rise buildings and daunting architecture which would then lead back down to street level for the reveal of Theo.

The second location - and the majority of the video - is set in Deptford High Street Market. This is where Amane lives so I thought it’d be nice to keep it relative. When I went on a recce there I instantly fell in love with it. It seemed like one of the last few spots in London that hadn't been gentrified and still had a strong local, mixed cultured community. There was so much energy and soul there, I knew it would be the perfect location to base the video around.

The location of the final scene was just down the road in a place called Deptford Creek. I wanted Theo's character to have somewhere to escape from so the river made perfect setting.

LBB> What kind of crew did you have?

JO> I purposely chose to work with a small crew as I didn't want to attract too much attention, given the idea. I managed to get Catherine Derry on board as DOP, she did such a fantastic job. A friend of mine was on B Camera which really helped in getting as much footage as possible. Rob Small helped produce it on the day and I got a notorious ex-doorman to stand and watch in case of any trouble. Only because we had a lot of equipment uninsured in a fairly unfamiliar area, so we had to cover our tracks… the old school way.

LBB> Tell us about the production… how long were you shooting for? What were the most memorable moments? How many of the people that feature were actually cast and how much is general happenings?

JO> The only person that was cast was Theo, everyone else was street cast on the day. We were shooting at 100fps on a wide lens which gave us a lot of freedom to capture whoever caught our eye. Myself and Catherine would walk around the market in between scenes and I would literally be pointing people out, we would run after them and capture them without them knowing (most of the time). I didn’t want to ask people's permission beforehand as it would ruin the moment and they’d become self-conscious, so it was very important for me to catch them off-guard and unaware.

The most memorable moment for me has to be the interaction between the young boy and Theo. When I told Theo to interact with the kid he looked so confused and intrigued. He backed up nervously only to then do a dance himself to camera! I was so excited, you just can't write moments like that.

We only did one full shoot day which included the market and end scene. It was pretty full on but everyone pulled together as a team and we got everything we needed. The week before, Catherine and I spent an afternoon picking up with the location shots for the introduction.

LBB> And what were the trickiest components and how did you overcome them?

JO> Everything ran pretty smoothly surprisingly enough. I'd say the only tricky component was in the edit. We had all of these beautiful street portraits of locals and footage of Theo dancing but it was becoming difficult to fuse the two together.

My editor Sara Faulkner had the idea to observe each angle and side of the street to tie the two in together, so rather than a random montage of people and Theo we managed to make it seem as though they were reacting to his dancing.

SF
view more - Behind the Work