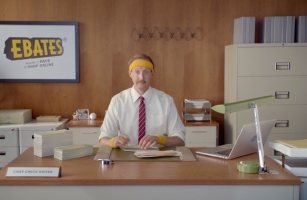 Full-service marketing agency EVB joined forces with Napoleon Dynamite director Jared Hess to create a compelling new TV campaign for Ebates, the pioneer and leader in online cash back shopping.  The agency was awarded the business in February.

Jared Hess, the director of popular films including Napoleon Dynamite, Nacho Libre,  and the upcoming heist comedy Masterminds, will helm each Ebates spot for the year-long ad campaign, which is set to air in the U.S. and Canada. The first in a series of commercials, titled “Check Writer,” debuted July 6th on national cable and network TV. Four executions are being created for each market, and the initial work will be followed by a second campaign later this year.

“Ebates members across the globe get paid to shop at their favorite stores,” said Mark Moran, senior vice president of marketing and distribution at Ebates. “We look forward to the launch of our new ad campaign, which has been created to spread the word to millions of new savvy shoppers in the US and Canada, so that they too can start earning cash back each time they shop online.”