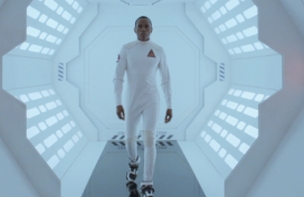 Alabama Shakes have just premiered their music video for 'Sound & Colour', directed by James Frost (Radiohead, Norah Jones, Coldplay) and based on a concept by Brittany Howard.

“It’s the story of an Astronaut in the future who was sent to explore deep space for new signs of life,” explains director James Frost. “His ship malfunctions and he wakes up 500 years off course, with no ability to communicate back home. The video is an observation of his emotions as he accepts his destiny.”

“I wanted a softer look to the image, as often shooting digital is so sharp it picks up too much information,” add Frost. “We ended up shooting using 1970’s lenses and an Alexa camera from Panavision. On top of giving a softer image, it also created a vintage look.”