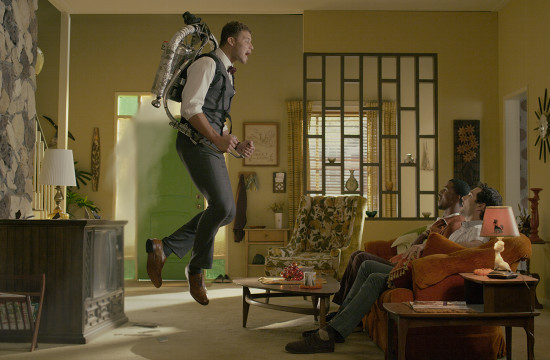 Following up the success of last year’s hilarious “Be Amazing” campaign, GameFly once again brought in Funny or Die’s commercial production division, Gifted Youth, to helm a brand new set of spots for the video game rental giant with “Jet Pack.”  Directed by Ryan McNeely and Josh Martin – the duo otherwise known as “Director Brothers” – the latest ads bring back NBA star Blake Griffin to reprise his role and once again show off his deft comedic chops.

The first of the two quirky spots, directed at gamers, launched online this week and goes to broadcast next week.  The ad opens with the ever-so-dapper Griffin literally flying out of last year’s spot as it airs on an old-school television set in the present.  Two stunned couch surfers experience Griffin in serious 3-D as he crashes in via jet pack to give them the 411 on Gamefly.  The Clippers all-star and former Funny or Die “intern” explains the benefits of the video game rental service as he shoots around the room with his nitrogen-propelled pack breaking pretty much everything in sight.  Griffin is expertly deadpan in his delivery, offering steely gazes and fist bump condolences on his way to the bathroom, all while adding a new level to his vertical.

The client-direct ads - one for gamers and one for kids - presented a few challenges to the team due to Griffin’s hectic schedule and the need to appeal to the current generation of gamers while also remaining kid-friendly.  Additionally, the two spots also had to share some of the same choreography, dialogue, and set. “It was a very ambitious shoot and something we knew would be impossible with most actors and almost all sports players,” explains McNeely. “But because of our previous experience working with Blake, we knew he was one of the few people who could pull this off.”

Therapy Studios handled editorial, sound, and post-production, with editing by Kristin McCasey and sound design by Eddie Kim. "It was great to pick up with Gifted Youth where we left off with the 'Be Amazing' campaign from last year," comments editor McCasey. "The Director Brothers captured an awesome performance from Blake, despite his being harnessed and flown through the air for most of his takes!  We had a lot of fun putting the edits together."  Design and vfx company, Visual Creatures (also Ryan McNeely with partner John Cranston) handled the visual effects necessary to propel the NBA star into the air.