Director Ben Orisich Finds the 'Fountain of Youth' for Chevy 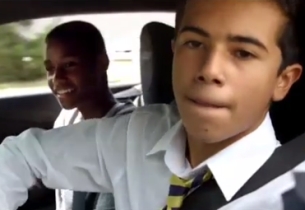 Award-winning director/creative director Ben Orisich channels his own boyhood wonder when driving American muscle cars in the charming new spot, “Fountain of Youth,” for Chevy’s Camaro SS.  Produced in conjunction with Whoa Films!, the spot features two adult men who instantly turn back into their boyhood selves when driving the Camaro SS.  Braces and high-fives amidst tire peeling and full throttle excitement that beautifully celebrates the iconic car.

Says Orisich, “This is a passion project based on how I feel every time I get to drive a muscle car like the Camaro.  In considering what I wanted to create, I started thinking about how these cars make me feel.  The funny thing is every time I do a burnout or rev of the engine, I feel like I'm 16 again so that became the premise for this project.”

The spot follows the two men-turned-boys as they drive enthusiastically through their neighborhood, capturing the attention of a pretty woman and the police.  When the woman sees the car, she too turns back into a young girl, and the police surprisingly give the drivers an approving nod.

The Camaro in the spot was partly driven by teen racing phenom Brandon Weaver.