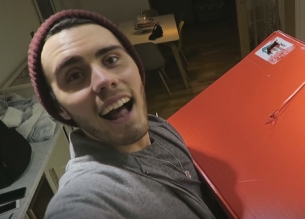 Direct Line has today announced its partnership with popular vlogger Alfie Deyes to target young drivers. Although those aged 17-19 make up only 1.5 per cent of UK licence holders, they are responsible for 12 per cent of fatal and serious crashes. Direct Line’s campaign aims to improve these young people’s driving skills and reduce road deaths in the UK.

Wendy Pearson, Head of Marketing at Direct Line said, “We approached Alfie after discovering his 4.5 million subscribers regularly joke about his lack of driving skills using the hashtag #alfiecantdrive. He is an excellent role model for young people who can inject a sense of fun into our campaign whilst assisting us in our ultimate goal of helping Britons to be better drivers.”

Having passed his test following driving lessons provided by Direct Line; the partnership will see Alfie insured on a Direct Line telematics policy for a year. The policy will allow Alfie to install Direct Line’s 'Drive Plus Plug In' device which will monitor each journey, recording scores and suggesting improvements on his cornering, accelerating and speed via a ‘Drive Plus mobile’ app. Alfie’s adventures will be posted exclusively on Direct Line’s YouTube channel over four months which Alfie will link to on his own PointlessBlogVlogs.

To measure the success of the campaign, Direct Line will complete brand tracking and brand connotation for its site now and compare the results in four months’ time. It will also undertake soft social measurements such as views, likes, shares and follows. To kick off the campaign, Direct Line sent Alfie a Direct Fix red box of driving goodies ahead of his driving test which the vlogger featured on his PointlessBlogVlogs channel, accumulating over 435,000views.