Digital Dublin: How the Rise of Silicon Docks Has Changed Irish Advertising

Trends and Insight 987 1 Add to collection

Google, Amazon, Twitter et al have set up HQs in Ireland but has the silicon gold filtered into the local ad industry? 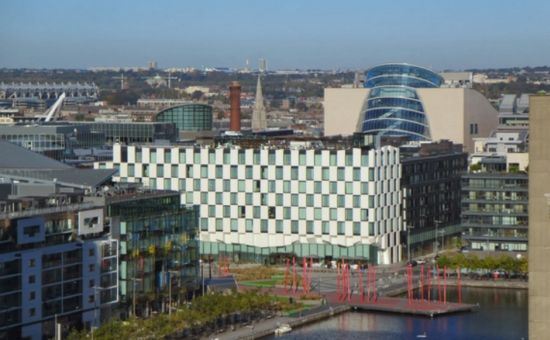 Feeling down in the dumps? In need of cheering up? You could do worse than to call up one of Dublin’s digital agencies for a chat. Digital adspend is on the up-and-up in (2014 total digital adspend was up 34% in 2014 compared with 2013) and there’s a palpable excitement around

Over the past decade and a bit, Silicon Docks (Dublin’s tech hub) has gone from a quirk to a force that’s transformed the outlook and global standing of the city. Google officially opened its European HQ in Dublin in October 2004, in the same year Amazon opened a software development centre, LinkedIn opened an office in the city in 2010 and had to move to other premises in 2014 thanks to an aggressive hiring drive, Twitter opened its EMEA HQ in the city in 2013… and when Airbnb announced Dublin as its European head office, Forbes greeted the news with the headline ‘What a Surprise’. There’s Facebook and Instagram and Etsy and eBay and, well, a who’s who of tech behemoths attracting global attention and talent to the city.

And, yes, indubitably the silicon giants have been tempted to the Emerald Isle by its low corporation tax (the ins and outs of which are, perhaps, discussions for a different day) but their presence has spurred a crop of locally-grown start-ups. There’s Stripe, who are leading the field in mobile payments, to the entrepreneurial crew at DoSpace who have transformed a barge into an 800 square feet collective workspace. The biggest digital conference outside of the USA now takes place in Ireland – Web Summit is expecting 30,000 attendees between November 3rd and 5th.

It’s a rare good news story for Ireland, a country that was hit infamously hard by the global economic downturn. CKSK’s Head of Strategy, Graham Nolan, credits the arrival of the tech giants with providing the country with a sense of hope and shielding digital agencies from the very worst of the crash.

“During the recession of the last decade, the tech sector was one of the shining lights within our economy, almost being immune to the downturn,” he reflects. “While the wider economy was shedding jobs, hundreds of roles were opening in Google and Facebook almost overnight. So economically they’ve been hugely important. Socially, the profile of people they are attracting to Ireland is quite interesting as many of the roles are Middle Eastern and African speaking roles so we have had a growth in highly skilled fluent professionals from that side of the world. I bumped into a group of Iranians in a Dublin restaurant one night and all of them had just joined Google.”

And so, over the past five or six years, digital agencies like CKSK or the youth-focused Thinkhouse have been able to survive – and even thrive (CKSK now has a presence in New York and Amsterdam and works with the likes of Heineken, Philips and Pernod Ricard on a global level while Thinkhouse has expanded with a London presence). While the local indies grow in their global ambition, the global shops have also been circling the local market, entranced by the opportunity. Last year the Dentsu-owned innovation hotshop Isobar acquired local digital agency Lucidity, attracted by the city’s tech-centred talent pool.

Another agency that’s successfully ridden Dublin’s digital wave is In The Company of Huskies. The artists-formerly-known-as-Cybercom were launched in 1999 but in 2013 rebranded to reflect a more platform neutral, creative and agile approach (plus the new logo is, not to put too fine a point on it, sick). They count the likes of Big Spaceship and 360i among their guiding lights and are positioning themselves as a collaborative, tech savvy agency that’s based in Dublin but is global in its outlook. They’ve worked on regional accounts like Coca-Cola, targeted international markets like the US, the UK, Germany and France for Ireland’s tourist board and have worked on global accounts for the likes of the Open University.

For David Hayes, the Director of Social Media at the agency, the upward thrust of the Huskies – and the local digi community more generally – makes him feel like the industry could be, if it continues to play smart, be on its way to becoming a new Sweden. “I think of digital shops like North Kingdom which launched in the arse end of nowhere and they’ve thrived. I see younger shops in Dublin and there’s something quite refreshing. It’s got a slightly Scandinavian feel to it.”

And while the surge of positivity among digital agencies in response to the Silicon Docks phenomenon is palpable, the presence of the tech corporations hasn’t always filtered into the local advertising industry as wholly as one might predict.

The rental market is now so hot it’s practically scorching (particularly in the Grand Canal ‘Googletown’ area) which is making things difficult for young talent.

What’s more, of all the commercial production companies we’ve spoken to, none have noticed an influx of film or production work from the tech giants. The same goes for many of the creative agencies we spoke to – although IAPI (Institute of Advertising Practitioners Ireland) says it’s endeavouring to persuade the tech companies to use local creative agencies as testing labs and innovation hubs for their new products.

Among the biggest upsets to be caused among the local ad industry by the rise of Silicon Docks is the increased competition for talent. In fact, among the agencies we spoke to, the talent drain was a universal concern.

IAPI’s Tania Banotti explains that the digital big boys have been particularly interested in experienced adfolk. “They tend to poach. Interestingly they’re not hiring people off the advertising courses but they’re poaching people with four to seven years’ agency experience. We have a particular challenge here because these companies are so profitable they’re able to offer a lot of money, so if we boost our creative reputation we can attract more international talent.”

But Silicon Docks are no new phenomenon and, she notes, recently there has been a trickle of talent flowing in the opposite direction. “That said, what seems to happen after a couple of years in Google is… it is what it is, it’s a selling for the Google product and you don’t get the variety you would get in an agency and so we’re actually beginning to see people who moved over there a couple of years ago wanting to get out!”

The two-way flow of talent is something that David from the Huskies has also observed. What’s more, it seems that the younger generation might be less in thrall to the Google glamour than the industry’s older cohort. “In some ways they’re nicking some of our talent and you can’t compete with the money they’re paying and there’s always a constant struggle from an agency point of view, developing your talent and your culture and making it a great place to work is hugely, hugely important,” he says. “But what’s also interesting is that I’m always in an ongoing recruitment process and what I always find refreshing, particularly from younger people coming in is that they don’t really want to work in the large companies like Facebook and Google. They’ve got quite an entrepreneurial spirit so they have that desire to work in more independent agencies.

“I think it’s had a dual effect as it’s been positive and negative but, ultimately, if you take a step backwards and ask if it’s been positive, I think it is a positive thing that they’re basing themselves here because it’s also attracting in other similar companies like Airbnb, Twitter, Hubspot and that can only be a good thing. From an agency point of view, when it comes to recruitment I’m seeing a wealth of international people here in Dublin, either because they’ve been drawn in by the large corporations and maybe they’ve done a couple of years with them and they’ve come out looking for other opportunities.”

Plus, according to CKSK’s Graham Nolan, globally-focused digital and social agencies based in Dublin have the benefit of having tech support on their doorstep. “The agency landscape has benefitted by having these tech companies situated a stone’s throw away. If Facebook were serving Irish agencies from California, then the support and communication would be very remote. But many large Irish brands have dedicated managed teams within Google, Facebook and Twitter now so the support is face-to-face and that’s accelerated learning, up-skilling and the ability to use their products for commercial gain.”

Like any major industrial upheaval, the arrival and then embedding of the Silicon Docks phenomenon has had a major impact on the Dublin landscape. And while its impact on the Irish ad industry has been largely focused on the digital shops, its wider impact has touched everyone living in the city.

In many ways Silicon Docks is a brilliant representation of Ireland’s changing role in the world – in the 19th century the docks were a hub of global commerce and trade and now they’re a hub for Europe’s e-commerce. It’s a sentiment that CSKS’s Graham concurs with.

“Dublin, like Belfast, Glasgow and Liverpool, has had to rethink and reimagine our city’s role within the country, our place within Europe and our position within what has become a global economy. It’s sad when the very heart of a city’s landscape has been neglected for so long and left to decay, but the emergence now of the Silicon Docks is a huge signal that we’ve found our way and literally rewired the heart of the city.

“The Silicon Docks is now diverse, young, energetic and progressive. You meet people from all over the world; it’s safe to walk around and there’s a fantastic entrepreneurial energy in the air.”