Digital Directors Chat About Launching a Career in an Online Age 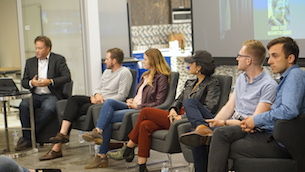 Emerging filmmakers and commercial directors from Rodeo Show, Washington Square Films, Gloria Content and Mutt gathered to share insight on how they have navigated their way to directorial success in a digital media landscape. Coming into the industry with an arsenal of digital tools at their fingertips, the #DigitalDirectors shared their stories and offered advice on how to win in the digital multiverse as a content creator, as well as how to overcome the parallel challenges it also presents. The panel was moderated by Wiredrive Co-Founder Bill Sewell and speakers included directors Carrie Stett (Washington Square Films), Gandja Monteiro (Gloria Content), Jonathan Hyde (Mutt) and directing duo Mccoy | Meyer (Rodeo Show Productions).

The event featured the insightful panel followed by a networking social hour where guests enjoyed freshly brewed craft beer from Santa Monica Brew Company and light snacks provided by Washington Square Films. The evening’s sponsor, SHIFT, also announced its upcoming Creative Fund Narrative Short Film Grant, which is opening for applications on May 1. The grant will award three filmmakers access to high-level consultations, a creative working space and production funding of up to $30,000 each.

Success can take many forms. For Jonathan Hyde, it’s about waking up and being excited about the type of work they’re doing and ensuring that it leads to being happy when looking in the mirror. For Carrie Stett, success is defined as the fulfillment that comes with being in a position that allows you to take care of financial responsibilities and pay the bills, all while being able to tell dynamic stories.

-When it comes to filmmaking, there is no one path or structure to success — what matters is that you continue to evolve and learn. Gandja Monteiro shared her take on the fluidity of successful filmmaking, “There is no structure in filmmaking--the only structure is to take jobs that come at you--and continue to learn and evolve.” Mccoy | Meyer’s Justus Meyer added, “Although there is no one clear path, it’s good to pause and reflect on where you’re at. I like to think that it’s important to acknowledge it when you achieve some form of success.”

-Building your career is not always in isolation. Speakers suggested to find mentorship in friends and coworkers whose work inspires you. Gandja Monteiro noted that although she did not have one specific mentor, she has embraced a collaborative approach and regularly shares her work with her favourite editor and DPs for creative feedback to ensure the end product is the best it can be. Although she never specifically asked for mentorship, Carrie Stett shared a tactic that has worked for her along the way: she has been prone to asking people she works with or admires for casual informational interviews. In these sessions, she asks them questions and picks their brain about creative strategies. Jonathan Hyde suggested aspiring filmmakers should surround themselves with a knowledgeable crew and leverage their experience. This opens up an opportunity to learn from them and respect their wealth of experience, guiding you in your growth as a director.

Advertising campaigns, largely in the digital arena, have been moving towards high volume and lower budgets. Although the budgets are lower, there is also more work, which can be an opportunity to break through and challenge your creativity. Panelists noted that working with smaller crews and tighter budgets can be tough, but also makes the role of the director more important and the work more valuable. Carrie Stett asserted that with low budget jobs, there is a bigger opportunity for creative freedom. Having leaner crews allows a director to follow their voice and create something meaningful for the client, leading to a great relationship and in her case, even a viral video.

Nowadays, content is all about “eyeball currency” and racking up as many views as possible. Panelists offered their wisdom on the illusive secret sauce to going “viral.” From a content creation standpoint, they all agreed there is no special formula for creating viral content, but that a good approach to take is to frame the story to hit certain beats that are typically seen in viral content. Stett noted that she’s aware that you should grab the viewer's attention within the first three seconds of a video on Facebook.That way, your content attracts viewers who are swiftly scrolling through their timelines.

Attendees noted that the panel was inspiring, and had the opportunity to personally thank the speakers for sharing their insights and experiences. The panel was also streamed via Facebook Live through Press Kitchen and can be viewed below

Thank you to the speakers, organisers, sponsors, volunteers and the event space, Phase Two.