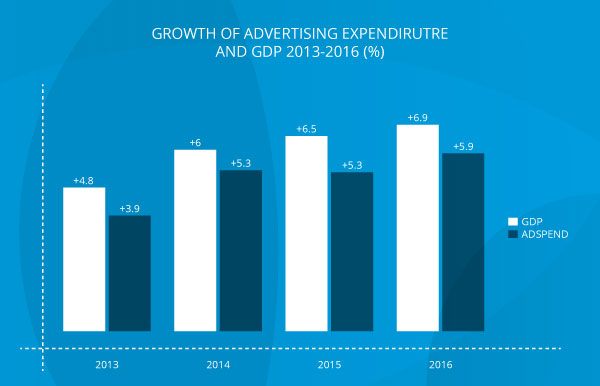 According to a new Advertising Expenditure Forecasts, ZenithOptimedia predicts that global adspend will grow 5.3% to reach US$523 billion over the course of this year. Internet advertising is by far the fastest-growing medium, which is forecast to expand by 17.1% this year, as improving digital advertising technology makes internet advertising cheaper and more effective. This growth is being driven by a wider spectrum of companies than traditional media, including digital specialists, tech companies, and direct advertisers.

New technology is improving most areas of internet advertising. Improved advertising formats – such as the ‘Rising Stars’ identified by the Interactive Advertising Bureau in the US – are making internet display more interactive and attention-grabbing, with consumers more likely to view, remember and interact with them than older formats. Meanwhile programmatic buying is evolving to allow more sophisticated and efficient targeting of display audiences, and is becoming better at delivering premium, brand-building experiences. ZenithOptimedia forecasts traditional display advertising to grow at an average of 15.8% a year between 2013 and 2016, up from 12.3% a year between 2010 and 2013. Social media display is growing much faster – at an average of 29.9% a year between 2013 and 2016 – with advertisers exploiting the explosion of mobile social media use and the ability to target across desktop and mobile. As online video extends to smartphones, tablets, gaming consoles and connected TV sets, it is providing advertisers with a wealth of new opportunities to connect with consumers: They forecast online video advertising to grow by 24.2% a year between 2013 and 2016.

Paid search is being boosted by the adoption of tools that have proved themselves in display, making it more addressable, as platforms give advertisers more control over where, when and to whom their ads are exposed, and also allowing the retargeting of consumers who have previously visited an advertiser’s website with custom copy. Zenith expects these improvements to help paid search maintain an average growth rate of 14.0% a year over the next three years, up marginally from 13.5% over the previous three years.

ZenithOptimedia expects internet advertising to command 23.6% of global advertising budgets this year, exceeding the combined share of newspapers and magazines (22.7%) for the first time. By 2016 Zenith expects the internet to account for 28.3% of global adspend, having narrowed the market share gap between itself and TV – the most dominant medium – from 15.9 percentage points to 9.9.

Mobile is the fastest-growing advertising segment

Mobile internet advertising (which means all internet ads delivered to smartphones and tablets, whether display, classified or search, and including in-app ads) is by far the fastest-growing advertising segment. This growth is being driven by the rapid adoption of mobile technology by consumers and the introduction of better advertising formats that allow advertisers to engage users creatively, without interrupting their browsing as much as early formats. This year Zenith expects it to grow by 67% – seven times faster than desktop internet – and to account for 20% of all internet advertising. ZenithOptimedia forecasts its share of internet adspend to rise to 25% in 2015 and 30% in 2016 as mobile devices continue to proliferate and diversify.

Mobile advertising is by far the largest contributor to global adspend growth. Zenith expects mobile advertising to grow by US$35 billion between 2013 and 2016, accounting for 42% of all the extra adspend added to the market, followed in distant second and third place by TV (30%) and desktop internet (28%) respectively.

Downgrade in Russia as tensions escalate

Our global forecast for 2014 – of 5.3% growth – is fractionally below the 5.4% growth Zenith forecasted in June. The principle cause of the downgrade is the escalation of tensions between Russia and the West over the Ukraine crisis. Russia has responded to trade sanctions imposed by the US and the EU with sanctions of its own, and further deterioration of trade and investment is likely. Zenith now forecasts Russia’s advertising market to grow just 1.7% this year, down from the 6.9% they forecasted in June and 9.0% in March. They still expect adspend in Ukraine to shrink by 32.5% this year as commercial activity remains severely disrupted.

Despite the recent disappointing economic news from the Eurozone – zero GDP growth in Q2 2014, and slowing manufacturing growth over the summer – our forecasts for Eurozone adspend growth are stable at 0.9% this year, marginally ahead of the 0.8% they forecasted in June. Strong signs of recovery in some of the markets worst hit by the financial crisis – Ireland, Greece, Portugal and Spain, where Zenith now forecasts 2.9% growth this year, up from the 1.1% they forecasted in June – have helped counterbalance weakness elsewhere. This has been especially visible in France, which they expect to shrink 1.2% in 2014, down from our previous forecast of 0.4% decline. However, advertisers will be keeping a close eye on Eurozone economic activity, and unless the economy picks up in the future we can expect to see some downward revisions to advertising budgets towards the end of the year.

“Internet advertising is expanding rapidly as new technology makes it easier for advertisers to reach the right people at the right time with the right message, at an efficient price. The spread of ever more sophisticated mobile devices will help this expansion continue, sustaining steady growth in global adspend for the next few years,” said Steve King, ZenithOptimedia’s CEO, Worldwide.