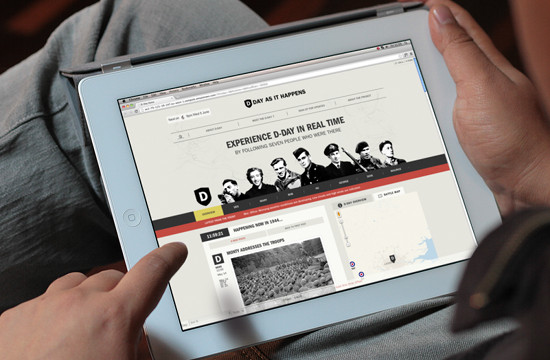 D-Day: As It Happens is a 24-hour history event to be broadcast across TV, web, mobile devices and social media, telling the story of this pivotal event in twentieth century history in a completely new way.  Using newly-analysed archive footage, viewers will be able to track the progress of seven people who were there on the day - each a real participant in the 1944 invasion.  And they’ll be able to do so moment by moment in real time – encountering the twists and turns of the fighting at the same time as our ‘D-Day 7’ did, and learning their fate as the action unfolds in parallel with the present.

New, unpublished research has been used to gather film, photographs, radio reports and other records of D-Day, work out when and where each was shot, and assemble them on a 24-hour timeline.  This timeline will then be played out on 5th and 6th June 2013, with each element released out at the minute it happened on 5th and 6th June 1944.

The project begins with an hour-long television programme at 9pm on 5th, telling the back stories of our D-Day 7 (among them a paratrooper, a midget submariner, a nurse and a military cameraman) and setting out their missions over the 24 hours to come.  A second hour-long programme at 9pm on 6th will recap the day and reveal what has happened to each.  In between, users will be able to keep up with their progress online, via Twitter, and through regular short-form updates on the channel.

The television coverage will be presented by Peter Snow, with Channel 4 Paralympics presenter and former marine Arthur Williams and experts including former British Army officer Colonel Tim Collins and front-line journalist Lorna Ward. The project draws on new and unpublished research by Colin Henderson, a British historian who has spent the last 15 years meticulously analysing the archive material on D-Day to identify individuals, locations and timings.

Channel 4 Specialist Factual Commissioning Editor John Hay says: "Channel 4 has a mission to try new things, and this feels like innovation with a real purpose - there's something about experiencing an event in real time that makes you feel it, and connect with it, in a new way. We're trying to make the first TV programme that delivers the past in the way that many of us experience news in the present. I hope it'll be emotional as well as illuminating."

Channel 4 Factual Multi-platform Commissioning Editor Kate Quilton says: “By tracking the events of D-Day in real time across platforms we’re aiming to create an experience that allows the audience to fully connect with the events of the day. It’s an incredibly exciting experiment in form.”

Executive Producer Ian Duncan says: "D-Day was one of the most photographed days in British history, covered by over 50 cameramen specially trained by the military. Colin Henderson’s painstaking forensic analysis of much of the visual material has allowed us to identify and accurately track the movements of seven individuals moment by moment through the drama of the day.

On June 5th and 6th, when we play out the experiences of our D-Day seven in real time, at the precise minute of the precise hour at which they actually occurred 69 years ago, hopefully the viewer will be given something of the feeling of being caught up in a live event.”