Coke will unveil J.W.Anderson’s designs at the end of July 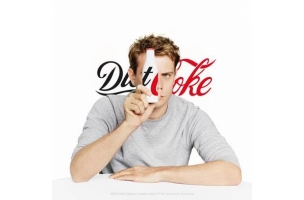 Last week Diet Coke caused a frenzy after posting a film teasing an exciting new designer collection. After much speculation and hundreds of guesses from excited fans, today Diet Coke can officially announce it is partnering with leading British fashion designer, J.W.Anderson.

The iconic soft drinks brand, which has a strong heritage of fashion collaborations, will unveil J.W.Anderson’s designs at the end of July. The exclusive collection will feature two limited-edition designer Diet Coke aluminum bottles, t-shirts, a tote bag and premium notebook. J.W.Anderson has taken inspiration from its signature knitwear prints and bold hyper-realistic photography, marking the first time Diet Coke has used photography on its designer bottles.

The collection forms an exciting part of Diet Coke’s ‘Regret Nothing’ campaign, which aims to inspire and empower people to embrace their impulsive side.

Jonathan Anderson, the founding designer of London-based J.W.Anderson, embodies the regret nothing philosophy. Jonathan originally wanted to pursue a career in acting but, after discovering a love for stage costume, made the brave decision to turn his hand to fashion. He hasn’t looked back and J.W.Anderson has evolved into an internationally renowned and award-winning brand with accolades including multiple British Fashion Award wins.

Designer Jonathan Anderson said, “I view Diet Coke as a pop culture icon so I was excited to have the opportunity to put my stamp on ‘Regret Nothing’. You can expect something completely different with lots of cool surprises.”

Bobby Brittain, GB marketing strategy and activation director for Coca-Cola said, “Jonathan Anderson’s regret nothing attitude helped him achieve outstanding success so we feel very excited to be working with him. This collaboration is unlike any of Diet Coke’s previous designer partnerships so we can’t wait to unveil what will truly be an inspiring fashion forward collection.”

A limited-edition collector’s box set, featuring J.W.Anderson’s Diet Coke bottles and notebook will be available exclusively, while stocks last from 17 August in Harvey Nichols stores across the country. Fans will also have the opportunity to bag a piece of the collection on Diet Coke social media channels from the beginning of August.