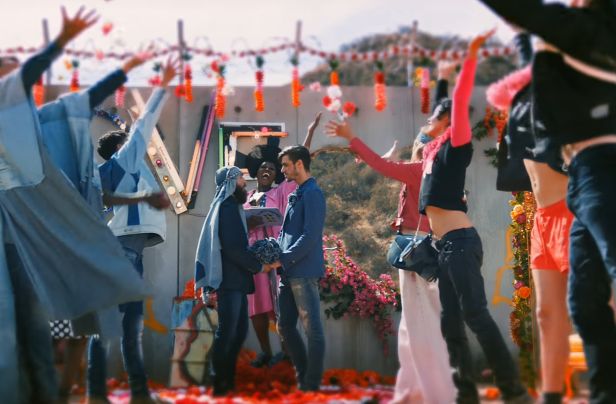 Diesel is back and bold-as-ever. The brand, known best for its 38 years of brave behaviour and style, just kicked off its largest global brand campaign to date. Diesel looks to build upon its reputation with its latest groundbreaking creative work brought to life by David LaChapelle.

Staying true to Diesel’s DNA as the fashion industry’s rebellious instigators, the brand is focusing on the core value of commenting on culture in order to inspire positive change. At a time when headlines are consistently shocking and acts of hate are on the rise, Diesel is uniquely positioned to be the voice of revolt. Providing a more inclusive human point of view, this global campaign eschews a new strategic vision that translates Diesel’s appetite for bravery, love and provocation in today’s world...  making love - not walls.

This spirit of rebellion is depicted in the SS17 campaign created by Anomaly Amsterdam. The campaign brings together a loud mix of bright, neon colours, strong provocative content and photographs boasting faces from very diverse backgrounds. From the David LaChapelle photograph of two sailors kissing to 2017, Diesel has always and will continue to exalt in inspiration and push boundaries. Who better to inspire the world than the photographer who struck a dramatic chord in Diesel’s 1995 campaign with his daring, iconic image? As one of the first big-budget, public advertising campaigns showing a gay couple kissing, the work struck discord for some - but for Diesel it hit all the right notes.

“At Diesel, we have a strong position against hate and, more than ever, we want the world to know that,” explains Artistic Director, Nicola Formichetti. “Love and togetherness is crucial in creating a society we all want to live in, and the future we all deserve.”

“We need to have the balls to break down barriers in a moment where fear is making the world divided with more walls.” says Renzo Rosso, Diesel’s founder.

Engin Celikbas, Anomaly Amsterdam CEO and Partner, noted, “Diesel has always been a rebellion brand, the voice of the disestablishment. They know who they are as a company and are not afraid to be an active global participant. There are those who watch as culture is created and there are those who take part in its shaping. Diesel is unquestionably the latter, which means that creativity can actually move the needle.”

The campaign will launch at the Nicholls & Clarke Building in the heart of London at Shoreditch High Street on February 19.