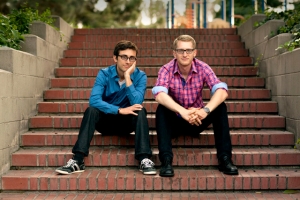 Dictionary Films managing director Chris Rossiter is very proud to announce the signing of the directing team of Eric McCoy and Justus Meyer, known collectively as Mccoy | Meyer.  The pair represents the newest roster additions along with director/DPs Dan Waymack and Logan Cascia.

Since joining together in 2012, the Mccoy | Meyer duo has already directed more than 50 short-form projects (many awarded through the LA-based content sourcing company Tongal) and earned a Telly Award and a Certificate of Recognition from the U.S. Congress.  Their commercial reel includes spots for Black & Decker, Famous Footwear, P&G, Verizon and Western Union, among many others.

"Eric and Justus are very energetic, talented and smart, and they are a joy to work with," said Rossiter.  "We are looking forward to introducing them to all of our clients and doing a lot of great work together."

McCoy began his film industry studies at Columbia College Chicago in 2005 and quickly leapt into freelance production, earning his way up the crew ladder in the camera, location and production departments on commercial and feature projects including "The Dark Knight."  He was an associate producer for The Midwest Film Festival for over five years before relocating to LA and landing the position of associate with the Sundance Film Festival.  Meanwhile, Meyer also studied at Columbia College in Chicago, earning his Bachelor's degree in Film/Video/Cinema in 2011, and soon thereafter, he also moved West to LA to form Mccoy | Meyer.  Both men built their experiences independently as producers before joining forces.

"We were drawn to Dictionary Films in particular because of their fearless passion for storytelling," the duo commented.  "From the beginning, Chris understood our goals and was remarkably in tune with our creative voice.  We're thrilled to have a home with Cutters and Dictionary Films."