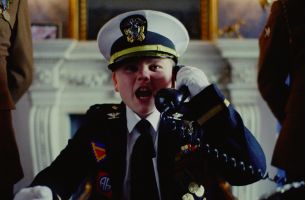 Today, Young Fathers release the video for their latest single, ‘Toy’. The video sees the band reignite their creative relationship with renowned Stink Films director Salomon Ligthelm, who approached the trio with the video concept after hearing the track. Ligthelm previously collaborated with Young Fathers on a video for 2014’s ‘Mr Martyr’.

Speaking about the video, Ligthelm states: "The tone of the track is so visceral and abrasive, which I think marries the political subject matter perfectly. I honestly just really like the idea of seeing dictators behaving like spoilt little children - pissed with the world, because things aren't going their way. Looking at the political climate of our time, I'd say truth is certainly stranger than fiction.”