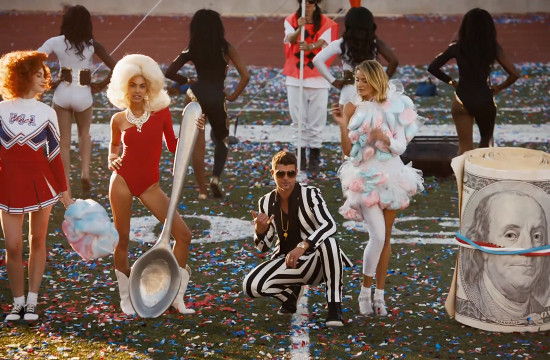 Black Dog Films director Diane Martel and Robin Thicke have gone at it again. After creating a phenomenon with the controversial "Blurred Lines" video, the duo reunites for the R&B crooner’s latest single featuring Kendrick Lamar and 2 Chainz, “Give it 2 U".

Thicke was understandably eager to join forces with Martel again, "The thing about Diane Martel that makes it so amazing — besides just being a crazy genius — is that she combines all different parts of the world into one soup," says Thicke, "we're all very lucky to have her and excited to be working with her again."

In perfect timing for the upcoming football season, the video sees Robin Thicke clad in a tailored black and white referee-inspired suit and flanked by the Alabama State University's dance team as he performs the track from the field. Images of Kendrick Lamar rapping from the backseat of a tiny monster truck, a woman dressed in cotton-candy and a giant ass-float are just added bonuses to Martel's latest concoction.