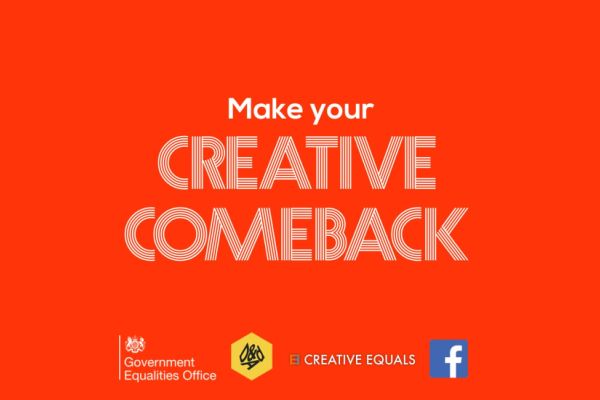 Diageo has been announced as the exclusive sponsor of the briefs for the Creative Equals ‘Returners’ scheme called #CreativeComeback. The scheme is designed to support women in the creative industries in the UK as they return to work after a career break of at least 12 months.

The programme, backed by the UK Government Equalities Office, will see 50 women returning to work as art directors, producers, copywriters, data analysts, designers and concept creators take part in a two-week programme that ultimately aims to help place them back into work.

The eight-day training programme will run over International Women’s Day in March. The first week will focus on bringing the cohort up to speed on all the latest creative and tech developments. The second week will see the group working on briefs for two of Diageo’s iconic global brands – Baileys and Guinness.  This will be followed by a four-day programme in Manchester from March 19th - 22nd.

Following the programme, returners will then go on a 2-6-week placement or a flexible job with one of the Creative Equals founding partners and will be supported by a dedicated coach throughout.

Syl Saller, CMO of Diageo said: “I am proud to sponsor the #CreativeComeback Scheme as when just 12% of creative directors are women[1] it’s not enough to talk about our ambitions for change, we need concerted action to turn the dial. This year’s International Women’s Day theme ‘Balance for Better’ must be championed in the creative industries. Balanced creative teams produce better work, balanced leadership makes better decisions and gender balanced workplaces benefit everyone.”

Ali Hanan, founder of Creative Equals said: “#CreativeComeback is how we create real tangible action to change the ratio of women in creative. We have had more than 195 applicants for our programme – an overwhelming response. With training from D&AD, Facebook and many top coaches, we know this programme will help put bridges back to work for those who have left due to children, cancer, caring responsibilities or other reasons. We are thrilled to have Diageo behind #CreativeComeback – its continued investment and commitment to fast-track diversity and inclusion is making profound change.”

Grainne Wafer, global Baileys brand director said: “There is a wealth of top female talent and experience leaving the creative industries that we cannot afford to lose. The returners will be working on challenging and exciting briefs for some of our biggest brands and I can’t wait to see what they come up with!”

Diageo has been working to increase inclusion and diversity in marketing – both in terms of progressive gender portrayal in advertising and by supporting initiatives that contribute to gender balance in the industry itself. This includes being a member of the UN UNstereotype Alliance and a signatory of Free the Bid to help to increase the number of female directors on adverts. Diageo has also reviewed its creative work globally to see where it needs to improve on progressive gender portrayal and is training it’s 1200 marketers and agencies globally in a comprehensive framework covering Representation, Agency, Perspective and Characterization of gender in advertising.

In January 2019 Diageo was recognised in the Bloomberg Gender Equality Index. In 2018 Diageo was named by Thomson Reuters as the 4th most inclusive and diverse company in the world and ranked by Equileap as the best company in the UK for gender equality.