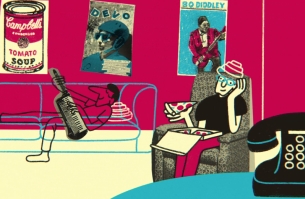 For the February issue, the team interviewed Devo’s Mark Mothersbaugh. In his video piece, animated by Madrid-based directing duo Manson, he talks about growing up legally blind and the wonders of seeing clearly for the first time, his disdain for music until he saw the Beatles live on the Ed Sullivan Show, and how the Kent State tragedy impacted his band and influenced their name choice. As art purists, the band was surprised by all the record label attention they received after the band hit it off big with “Whip it.” They never thought of music as making a hit single, they just wanted to share their message.