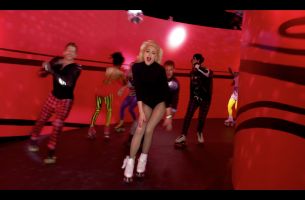 At last night's Grammys, Target and Gwen Stefani created the first music video ever created on live television, featuring the national broadcast debut of the superstar’s new single “Make Me Like You.”

Deutsch created this entire effort from the idea to production and execution. This included producing the commercial in partnership with Wondros, the production company and GRAMMY-Award winner music video director Sophie Muller. Deutsch also partnered with Target’s team to get Gwen on board.

During the live television broadcast, fans were able to watch a unique second view of the experience through Periscope, Facebook Live and Snapchat.Target also invited social influencers Todrick Hall and Meg DeAngelis to help reach even more guests and share behind-the-scenes content before, during and after the shoot and have cameo roles in the music video.

Target partners with musical artists to authentically connect with fans and deliver exclusive music, content and one-of-a-kind experiences. As part of its groundbreaking partnership with Gwen Stefani, Target is offering four bonus tracks (“Rocket Ship,” “Getting Warmer,” “Obsessed” and “Splash”) and exclusive cover art on its deluxe edition of “This is What the Truth Feels Like,” which will be released March 18th.

This first-of-its-kind moment can be added to Target’s history of creating unexpected, buzz-worthy moments that become part of pop culture. The brand has delivered fun and surprising moments during the Grammys’ telecast as a broadcast sponsor for the past 15 years, from unveiling partnerships with Imagine Dragons to Justin Timberlake to Shakira.

Details of the performance

- Gwen was joined by 40+ performers

- This was all shot live on a 32,000-square-foot sound stage on the Warner Bros. lot in Burbank, Calif. (Stage 16 is the tallest soundstage in North America).

B-roll footage including interviews with Gwen pre and post shoot can be viewed below: