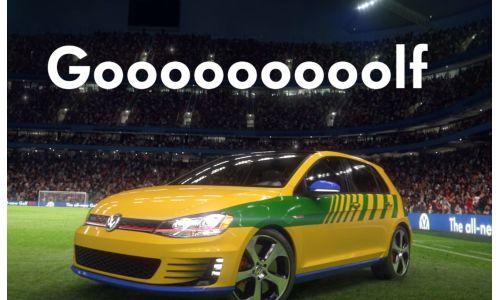 VW & Deutsch LA are attempting to "hijack" the World Cup without being an official sponsor with this series of digital videos called the "Goooooooolf Celebration Videos". Featuring the Golf GTI model, the videos show the car doing spins in the middle of a soccer field, screaming "GOOOOOOLF" just like fans scream "GOOOOOAAAAL" when their team scores. The videos are running alongside ESPN.com's live-streamed matches (found within WatchESPN) and on the new ESPNFC.com and will be timed to run a moment after a team scores,every time they score.

The videos are specific to the teams that are playing. So, when Brazil scores, a video will pop up with the team's colors and the VW Golf screaming "GOOOOOOLF" to online watchers, same for Croatia (with their team colors), USA, etc. All of the videos are a little different and technically there are nine variations of the core video overall, and then another 32 versions according to team colors from there. So each of the 32 countries has nine versions of "their" video, which will rotate through each goal they score during their game. Doing the math, that means 288 videos overall. In 2010, there were a total of 145 goals scored so they actually created more videos than there will be goals.