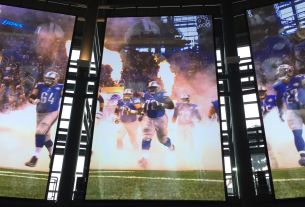 On April 13, the Detroit Lions rallied their fan base and earned national headlines by hosting a sensational Uniform Unveil event that was live-streamed by more than 300,000 viewers. Conception and production of the media events behind the fanfare – and the programming production consisting of several brand films, a complete on-air graphics package and an experiential art installation – were developed in partnership with Cutters Studios Detroit (CSD).
"From the moment we announced that we would be introducing new uniforms in 2017, the anticipation from our fans was palpable," said Detroit Lions Vice President of Marketing Emily Griffin. "Wanting to put on an unveil event that lived up to the excitement and interest of our fans, we approached Cutters Studios Detroit to discuss how we could collaboratively set a new standard for uniform presentations in professional sports. They exceeded our expectations for content creation and brought our vision to life, helping to produce a show that our fans in attendance will never forget."
With its successful studios in Detroit, Chicago, Los Angeles, New York City and Tokyo, a partial list of Cutters Studios' partner companies includes Flavor for design, animation, VFX and finishing, Cutters for editorial and Another Country for audio production, music supervision, composition and audio post. In Detroit, many of these services were previously facilitated through RingSide Creative, and now operate collectively as CSD. 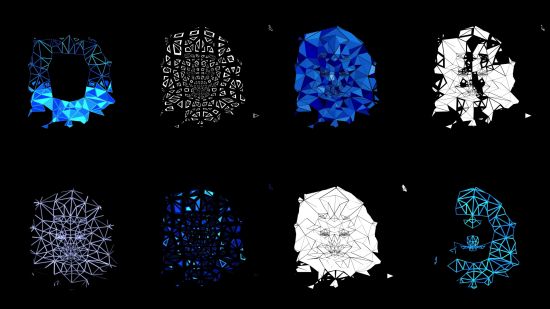 Building on this group's legacy of working with the Detroit Lions to produce the premium in-stadium video content featured during every Lions' home game over the past several years, Flavor creative director Jason Cook was a key part of CSD's team leadership. "When we were briefed by Lions' executives Kelly Kozole and Emily Griffin, they told us they wanted to create an epic event that would speak to the future of the franchise," Cook explained.
From award to debut, the CSD team had eight weeks to complete the assignment. In the end, CSD delivered an amazing experience. Cook himself co-wrote the script for an archive footage-based intro film ("Then"), which together with an interview-driven brand film ("Now and Next") framed the live presentation. A third "Reveal" brand film combined original animated content with new footage showing current Lions stars wearing the brilliant new "Throwback," "Color Rush," "Away" and "Home" uniforms.

With the creation and packaging of this content drawing on CSD talents from the craft areas of production, animation, editorial and sound design, the conception and production of the live event – ultimately performed three times to allow nearly 4,000 fans witness it at Ford Field in-person – was yet another virtuoso feat for its team.
Knowing the new Lions uniforms had to be front and center, Cook dug deep to ensure CSD's proposed solution was progressive and extravagant. "We pitched the idea of treating this as not just a uniform unveiling, but as an art installation where we powerfully connect to the Lions brand," he began. "Our concept included giant video screens for content - and at the center of the stage, a 15-foot tall geometric lion head sculpture that we projection-mapped visuals onto."
With that sensational artistic centerpiece at its heart, CSD's proposal featuring the "Then, Now and Next" and "Reveal" content earned franchise approval. This creative approach provided a roadmap for the event to play out over a span of about eight minutes.
"Everyone at Cutters Studios Detroit knows that the Lions are all about looking ahead," added Kurt Kulas, CSD's managing director. "With the recent, massive technology upgrade to Ford Field, everyone knew this event needed to showcase the NFL and one of its most storied franchises in spectacular fashion." 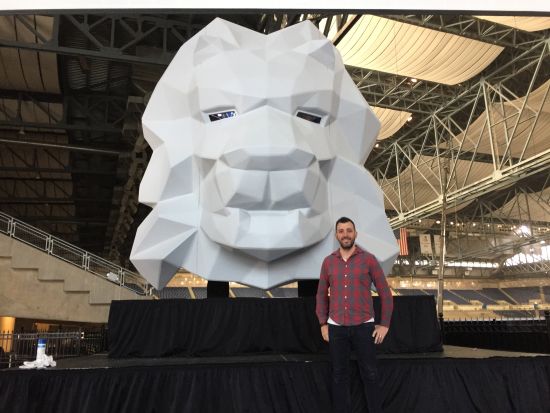 Rounding up the post-event buzz and news coverage from the event, the Lions' new Nike Vapor Untouchable uniforms (with their refreshed logo, logotype and styling) generated oceans of positive discussions. For the thousands of season ticket holders in attendance, the opportunity to join so many star players in-person at Ford Field and to witness an exclusive celebration with full fanfare, including a performance by the Detroit Lions Cheerleaders, was a bona fide win-win. All the excitement was captured for the hundreds of thousands of viewers who tuned-in via live streams on media channels including Facebook and the Lions' website. And there was one more facet of the production that turned a lot of heads: the animated lion head.
To shine some light on the technical wizardry behind this component, the CSD team began by sketching the head on paper, then used Adobe Illustrator to clean it up and Autodesk Maya to model it. From there, the model was machined and sculpted out of foam. "If that sculpture was off even an inch, our graphics wouldn't line up," Cook explained. "It was so exciting to see it lit up for the first time as everything came together."
The graphics to be projected onto the lion head were created mostly using Maxon's Cinema 4D (C4D). With the UV map from Maya as their guide, Flavor's artists got very creative with C4D's Mograph module, producing animation that was composited in Adobe After Effects. The resulting sequence of over 13,000 frames was projection-mapped onto the lion's head to dazzling effect throughout the eight-minute live performance.
The CSD team's custom graphics package for the event included an animated logo and a show open, as well as bumpers, transitions, mortises and animated supers. This work was done in C4D and Maya.
In Cook's summary, editorial in the hands of editors Karl Rausch and Jim Talbot was the other massive part of the event. The three brand films were designed specifically to maximise the three massive vertical screens that were hung from the Ford Field Atrium's structure, as well as another huge screen for the main stage above the lion head. "The story was told using the screens in different ways, creating complements and contrasts at key moments in the event," Cook continued. "We even got a chance to work with famed NBC Sports commentator Mike Tirico, who provided his voiceover talents to launch the event."
One more CSD core strength on display was the strategic sonic planning provided by Jay Scott and Joe Philips. Along with the talented team at Another Country Detroit, they delivered an immersive, on-brand audio experience. "These guys brought so much depth and character to the show," Cook said. "The music supervision and bespoke sound design they created elevated the whole experience exponentially."
From there, Cook concluded, "The sound and music, scale of the screens, and the great edit combined with the lion sculpture made the event feel truly epic. The fans were really blown away by the spectacle of it all, and it's safe to say they loved the new uniforms, too."
view more - Creative