Derek Samuel announced as winner of the 'Professional' section 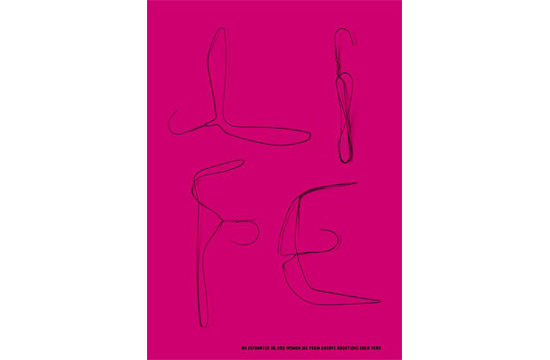 Designworks’ Creative Director, Derek Samuel has been announced as the winner of the “Professional” section at this year’s AGDA Australian Poster Biennale.

Samuel’s entry, entitled Life, was described as both “courageous and honest” by world renowned French poster designer and competition juror Alain Le Quernec who presented Samuel’s with his award at the opening of the AGDA 2013 Australian Poster Biennale Exhibition where the winning poster is on display.

Designworks' CEO Sven Baker acknowledged Samuels’ achievement saying: “We are immensely proud of Derek and congratulate him on achieving his rightful place on the world stage alongside his creative counterparts from around the globe. It is pleasing to see Derek’s work acknowledged alongside the world’s best.”

The theme for this year’s competition “"A mother's life is precious" prompted designers to create posters dealing with a range of issues targeting women’s rights, women's health and maternal mortality.

“I am delighted and humbled to win this award and the recognition that accompanies it,” said Derek Samuel, Creative Director, Designworks. “More importantly I am glad such an important issue in society today has gained the attention it deserves.”

This year’s Biennale attracted over 300 entries from across the globe, including Australia, Turkey, Poland, China, Ecuador, USA, England, Greece. The forty finalist’s posters are displayed at the AGDA 2013 Australian Poster Biennale Exhibition from May 3 – 16 at Monash School of Art Design & Architecture.