Designing Communication Between Chatbots and Drivers 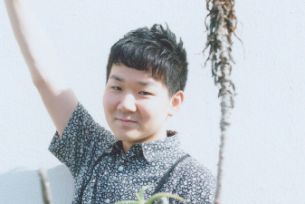 Nowadays, car navigation systems are indispensable in Japan, where apps that make it possible for a smartphone to be used as a car navigation device are on the market. Incorporating the most up-to-date map data, these highly functional apps have been gaining popularity.

Some of the apps for smartphones come with voice dictation functions, so drivers do not need to manually operate them while driving. This allows a user to specify the destination and change the map display just by giving verbal instructions.

The project involved developing a trial voice ad service in collaboration with a company that offers a car navigation app.

The service was designed to encourage drivers using the app to visit participating stores along the way to their destination. They could do this by means of chatting ads that give information about items on sale based on external data sources.

A supermarket chain participated in the trial. To create the chatting ads, we incorporated a prototype of an interactive dialogue system currently being developed by Dentsu.

The ads ask whether the route should be changed to go to the nearest store, and start the navigation once verbal confirmation is received from the driver.

The external data included the date, the day’s weather and temperature, time zones, and information about the driver. Such data enable chatting ads to make recommendations.

For example, ads can recommend to a housewife, who is driving on a weekday afternoon, recipes that are quick to make and suggest buying ingredients for a stew or hot pot on a day that is noticeably colder than the day before.

In other words, the ads can more effectively promote products by considering what the driver needs at opportune times.

The diagram below shows the basic steps of the service. 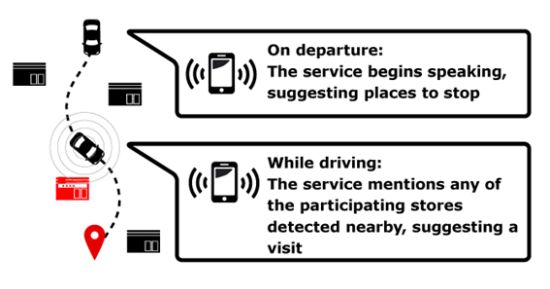 The first thing we considered was an appropriate sense of communicative distance for drivers in the context of their everyday lives.

Since chatting ads about a bargain would be played at an opportune time, while the listener is driving, ads that interfere with driving would probably be ignored or cause the driver to avoid the service.

People tend to dislike ads. Takashi Nakahata, one of Japan’s most distinguished copywriters, once noted that advertisements are expressions conveyed from a standpoint that is disadvantaged: the original intent is obvious.

Just as in other areas of marking technological progress, attracting people’s attention is an important communication issue. With that in mind, we considered how to realise a sense of communicative distance similar to that of radio: not too obtrusive and not interfering with driving.

On that basis, we thought that an effective way to encourage users of the app to visit stores was to offer topical information, little by little every day, while chatting in contexts in which products can be promoted. Reflecting that approach, we produced scripts for the dialogues.

It has often been pointed out that Twitter is similar to the back and forth exchanges characteristic of radio, since information flows seamlessly in real time and users occasionally interact with each other.

When I was involved in a campaign that made use of Twitter or corporate Twitter accounts, the experience I gained writing copy for a content series was very helpful for thinking up the scripts for this project.

There are technical hurdles involved in entering voice commands while driving because, in vehicles, smartphones are usually placed at a distance from the driver and it can get noisy when one is on the road.

Among the many background sounds, running a vehicle makes a noise, as does the radio. And the vibration caused by a vehicle that is being driven also has a major effect.

All this makes it difficult for a smartphone mic to pick up only the voice commands needed for the app to function. Moreover, the longer the driver speaks to the app, the greater the impact of the background noises and the vibration.

Since that raises the likelihood of the wrong information being input, we designed the dialogue scripts for the trial service to elicit just two simple responses from the driver, either yes or no. We also included a function to stop the ads if the driver says “Be quite” or “Stop.”

In addition, we had to do everything possible to ensure that the act of speaking to the app while driving would not cause an accident. To this end, we set the dialogue system to pause when drivers must pay special attention to the road, such as when making a turn.

To make sure that the app would not be obtrusive when the ads are chatting, we designed ads that would ask the driver’s permission before initiating a chat.

While considering the technical limitations, we wrote ad scripts about topics that would give a similar sense of communicative distance as does the radio, and facilitate conversation according to a yes or no response. We came up with two different script patterns.

a) The app would initiate a chat relevant to the current day, based on date-related data.

b) The app would initiate a chat relevant to the temperature or something about the driver, based on external data sources.

For example, in line with pattern a), we made the following content for February 3rd. In Japan, that date marks Setsubun, the last day of winter according to the traditional Japanese calendar. People celebrate this occasion by eating sushi rolls and taking part in a bean-throwing ritual.

“Today is February 3, Setsubun. Since the date of Setsubun is determined by the movement of the sun, it will be one day earlier (February 2) in 2025. How about preparing for the festivities? Setsubun beans and sushi are now being sold at [store name]. Would you like to stop by at the nearest store in [location name]? Could you please answer yes or no?”

If the driver answers yes, the app responds:

“I have set the route so we can stop off at the [store name] in [location]. I will now start giving you directions.”

If the driver answers no, the app responds:

In the case of pattern b), we made the following content about a day on which the temperature dropped below the previous day’s lowest level.

“It is still cold today. You should make sure your immune system doesn’t grow weak, allowing you to catch a cold. Protein is especially important for boosting the immune system. At [store name], there is a good selection of seasonal fish, including salmon, tuna, and yellowtail. They would be great for sashimi or hot pot. Would you like to stop at the nearest store in [location]? Could you please answer yes or no?”

In this case, the responses to the driver’s answer are the same as for pattern a).

4. Field tests to verify relevant factors over a PDCA cycle

After analysing the ad scripts, we carried out practical tests on the road. Under the same conditions and everyday circumstances in which drivers would use the app, we checked all kinds of factors, including the voice recognition speed and the timing, frequency, and length of the chats.

When conducting the tests, various problems that we had not anticipated became apparent. For example, there were unexpected delays in the timing of the sentences spoken by the app, the frequency of the chatting was either too high or too low, and the text was generally too long.

In response, we identified the source of the problems by analysing test videos and logs, and made the necessary corrections. We then conducted the road tests again, making improvements as we followed a plan-do-check-adjust (PDCA) cycle, the four-step business management method used to control and continually improve processes and products.

Next, we conducted demonstration tests. From late January until the end of March, we invited people to try out the app, and eventually got about 5,000 people to use the service.

During testing, the app spoke over 30,000 times. The results showed that drivers who listened to the scripted chats—compared with those who didn’t—were about 2.3 times more likely to stop off at a store of the participating supermarket chain.

In this project, we created a basic framework for a chatting ad service by carrying out our first trial. But we believe that future development projects would benefit from the following improvements.

The service we developed made verbal suggestions based on information about each driver who registered to use the app, as well as the date and atmospheric temperature data.

In future, it will be possible to make subtler recommendations if we can access more information about drivers from data held by client companies or other sources.

For example, by integrating data on a driver’s purchasing history, the service could recommend a recipe using leftover vegetables purchased the previous day. Or it could remind the driver to buy toilet paper when the stock seems likely to be running low.

2. Services with multiple clients for a more convenient platform

We offered information about just one supermarket chain in the trial, but we can provide more news about goods on sale and increase convenience for drivers if numerous clients participate in the service.

Greater convenience will lead to more users, making the service appear more attractive to clients as a platform.

Were that to happen, Dentsu, as the platform provider, would need to coordinate the timing of the chatting ads and establish rules regarding repetitive content in order to gain the consent of each client.

3. Optimisation of user service based on habits

We acquired logs of user use during the testing phase but, since the trial was conducted over a short period, recommendations by the chatting ads did not have much of an effect. In that regard, there is ample room for improvement.

For example, for users who respond daily to chatting ads, it would be better to either switch to scripts that reduce the sense of communicative distance, or change the timing of the chatting ads to days and times when users are most likely to respond.

Perhaps the biggest advantage of a voice dictation chatbot system is that it eliminates the time and energy required for data input, making it easy to blend in with contexts of everyday life.

That said, such a system can seem completely out of place and make people feel uncomfortable for any number of reasons. These include inappropriate dialogue content, poor timing, and unexpected responses. Great care should be taken with advertisements, since people generally dislike them.

These concerns are not limited to car navigation systems, however. They are equally relevant to the communication design of smart speakers such as the Amazon Echo, Google Home, and Apple Homepod, as well as to LINE’s Clova Wave, all of which are expected to become more widely used in the future.

I would like Dentsu to tackle these issues by taking advantage of the copywriting and communication design capabilities it has accumulated over many years.

Further, it is essential that Dentsu’s existing businesses - such as experience design - combine their expertise even in areas that might at first appear unrelated.