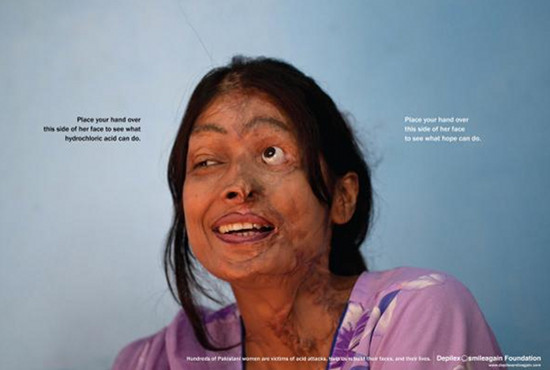 Acid attacks by men on women are disproportionately common in South Asia, and have hit the headlines in the Western media recently with the assault on two young British women in Zanzibar. In Pakistan the most common motives for these cowardly attacks on women are rejected marriage proposals and spurned sexual advances, and the victims suffer not only physical but also long-lasting psychological damage.

There have been several attacks for other reasons; Husbands throwing acid on their wives for supposed ‘disobedience’; Acid being thrown on women to ‘settle’ family disputes; or revenge for an insult or indiscretion on the part of the woman’s male relative. These attacks, as documented in the Oscar winning documentary Saving Face, are most common in the Southern Punjab, an area which is economically deprived and under- developed.

The Depilex Smileagain foundation, based in Lahore, Pakistan, is a charitable organisation committed to giving the survivors of these shockingly prevalent acid attacks medical treatment and counselling. The website carries many moving case studies of women who have been rehabilitated by the foundation, and been able to slowly rebuild their lives after the devastating effects of an attack on their body and soul.

IAL Saatchi & Saatchi Pakistan conceived a hard-hitting print campaign which shows the victim of an acid attack, inviting the viewer to place their hand on one side of the woman’s face to see the shocking devastation caused to her acid-ravaged face, or on the other side of her face to show how she has somehow managed to find a way to smile through such adversity. 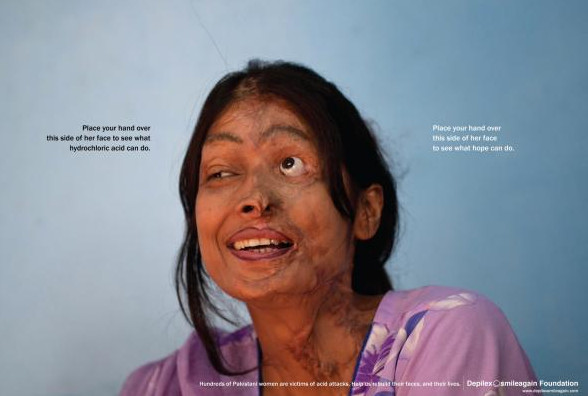