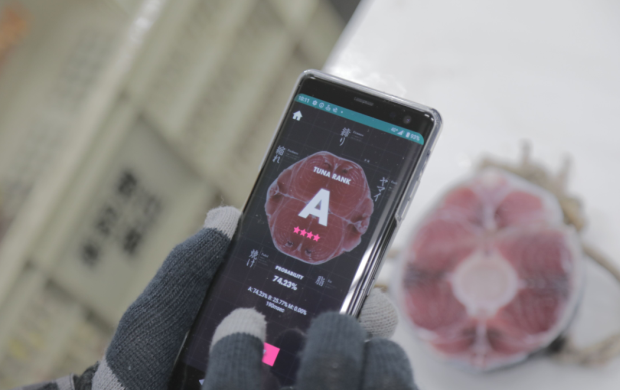 Dentsu, together with its subsidiary Information Services International-Dentsu, Ltd. (ISID) and major general trading company Sojitz Corporation (Sojitz) as its development partners, has developed TUNA SCOPE (trademark pending), an AI-based system that judges the quality of natural tuna using cross-sectional images of their tails. The goal behind the development of this system was to pass down skills in the field of tuna evaluation, an area with a serious shortage of successors. In March 2019 a fishery factory in Yaizu, a city located in central Shizuoka Prefecture, implemented the completed TUNA SCOPE system.

The TUNA SCOPE project was masterminded by a Dentsu creative team, with creative director Kazuhiro Shimura playing a central role. Also on the team were business producer Akimichi Hibi, communication planner Ryo Sasaki, and art director Daisuke Matsunaga. The team’s mission was to use the creativity that Dentsu has cultivated in the field of advertising to produce new innovation and create new businesses. In accordance with this mission, the team members took on the challenge of finding ideas that provide solutions to the shortage of tuna wholesalers, a problem that has garnered a lot of attention, largely due to the recent relocation of the world-famous Tsukiji fish market in Tokyo.

First, the team visited several fishing ports, including Tsukiji, and conducted interviews with tuna quality experts and other representatives of the tuna industry. They found that wholesalers at the Tsukiji market (relocated to Toyosu in October 2018) determine the market value of tuna using unique evaluation techniques they have honed over many years. This expertise has been described as “a quality expert’s intuition,” as it is tacit knowledge that is difficult to systematise or put into words, and is said to require at least ten years of experience examining tuna on a daily basis to acquire. Successors are declining year by year as wholesalers in the industry continue to age. Only a limited number of tuna can be evaluated per day at auction sites, which is a major reason why large amounts of time are required to train successors in the field.

Based on this knowledge, the team came up with the idea of creating a new system that can evaluate quality by acquiring vast amounts of data in a short period of time using AI-based deep learning. To accomplish this idea, the team members focused on cross sections of tuna tails. Top-class wholesalers indicated that they could predict the quality and taste of a tuna simply by glancing at a cross section of its tail. These cross sections were teeming with data that demonstrate tuna quality.

The team then took a prototype of its tuna evaluation system to the Fisheries Division at Sojitz Corporation, a major trading company in Japan which processes a vast number of tuna each day on a global scale, and made proposals concerning joint development. Ultimately, the parties came to the decision to fully implement TUNA SCOPE through joint collaboration among Dentsu, ISID, and Sojitz. They began photographing and collecting cross-sectional tuna tail samples at one of Sojitz’s client fisheries and succeeded in acquiring data on over 4,000 cross sections. Through trial and error, the team then built a four-stage quality assessment system.

The team then incorporated the AI technology they developed into a smartphone app and conducted a test implementation at the factory in Yaizu. The system’s results matched those of a four-stage quality assessment conducted by tuna wholesalers with 35 years of experience in the field at a rate of 85%.

Tuna that received the AI system’s highest rating were branded as “AI tuna” and were sold at a sushi restaurant located at Tokyo Station. Over 1,000 plates of this tuna were sold at the restaurant over a period of five days. Approximately 80% of customers who ate the tuna described it as “even more delicious than normal tuna sold at the same price.”