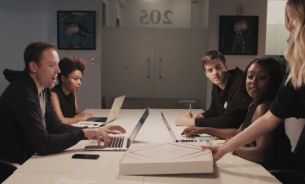 Delta just sprung a big surprise on four overachieving staffers at video news company NowThis. They thought they were ordering pizza during a typical late night work session but when their pie arrived, it came with eight Delta tickets to the birthplace of pizza, Italy.

Delta selected these hardworking employees through a Slack integration. Via its GoFridaysBot (created in partnership with the makers of Growbot). Delta infiltrated the Slack channels of companies across New York and identified the most productive employees. Delta found those most overdue for a vacation, and awarded them with just that.

The delivery surprise started at Sal's Pizzeria in New York's Little Italy where the brand hid the giveaway - four pairs of round trip tickets to Italy - inside the pizza box.  The foursome - a team of producers, a publisher and an engineer - walked away with roughly 2 slices and 2 round trip tickets each. Not too bad.

This is the latest in Delta's Go Fridays Campaign, wherein Delta has been rewarding overworked New Yorkers with first-class ways to reclaim Summer Fridays.

Delta will continue to surprise deserving New Yorkers this summer with epic ways to take a summer Friday - ticket vouchers, Subway Series tickets, private museum tour passes and more.  To be a part of the fun, follow @DeltaNY and #GoFridaysContent. The campaign was created by Delta’s agency, Wieden+Kennedy New York.