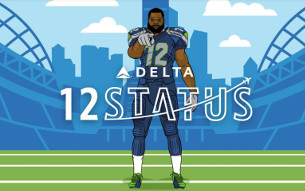 The Seattle Seahawks will throw for more than just passing yards this football season. They’ll also throw for SkyMiles with the launch of Delta Air Lines’ 12status, a fan engagement program for Seahawks fans in Washington state to earn miles, merchandise and exclusive perks.

12status is the airline’s first program that allows sports fans to earn miles for Award Travel simply for being a fan. Fans can sign up for 12status to automatically receive miles for on-and off-the-field activities, including:

12status members will also receive perks when they fly with Delta, including priority boarding on flights out of Sea-Tac during football season beginning Sept. 8 and free merchandise in the terminals during away game travel periods. Members are also eligible for surprise seat upgrades in the Delta Sky360 Club at CenturyLink Field.

“Yard by yard and mile by mile, Seahawks fans can turn their fandom into a tangible benefit simply by signing up for 12status,” said Mike Medeiros, Delta's Vice President – Seattle. “Our commitment is to be a great partner, and this partnership in action gives fans a chance to build their SkyMiles accounts and yet another reason to support the team.”

“Delta Air Lines has been an outstanding partner who continues to deliver exceptional services to our fans,” said Amy Sprangers, Seahawks Vice President of Corporate Partnerships. “The 12status program gives Seahawks fans the opportunity to enhance their travel experience while rooting for their favorite team.”

Seattle Seahawks defensive end Michael Bennett appears on the 12status digital hub, which allows 12status members to track miles earned, keep up with perks and exclusive offers, and capture their official 12status SkyMiles membership badge to be used for priority boarding at Sea-Tac and for claiming limited-edition merchandise and prizes throughout the season.

In 2015, Delta and the Seahawks celebrated the extension of their sponsorship and Delta’s status as Official Airline of the Seattle Seahawks. Delta provides charter service for the team to and from each road game. Delta is also represented at CenturyLink field with a wraparound entitlement space and the Delta Sky360 Club, which spans the entire Club Level at CenturyLink Field. The airline also supports the team’s five-state, 48-station Delta Air Lines Radio Network.

Delta is the largest global carrier at Sea-Tac and has more than tripled flights and destinations at its Seattle hub since 2012. Delta offers more than 150 peak-day departures to more than 40 destinations from Seattle, and every Delta flight from Seattle features jet service with Delta One/First Class and Delta Comfort+ seating. Free entertainment is available via Delta Studio as well as Wi-Fi service on nearly every domestic aircraft operating in the contiguous U.S. The airline will open a new Delta Sky Club located between Concourses A and B in late 2016. The airline’s expansion at Sea-Tac is estimated to contribute $571 million annually in total economic output.