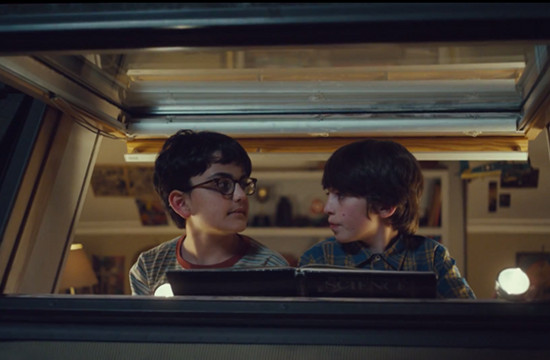 In the wake of the company’s recent privatisation, “Brothers” aligns the Dell brand with entrepreneurial spirit while also showcasing how its tablets can empower a small company to expand globally. The spot strikes a balance between speaking to entrepreneurs and business decision-makers with its messaging, while also telling a story consumers will find intriguing.

In its :60 format, “Brothers” tells the story of Ed and Will Kavanaugh, a pair of siblings “so in synch” that it was apparent from early childhood that they had some sort of “cosmic connection.” Through various set-ups (help from afar with a math problem at the blackboard, sharing a crush on the same girl), we see the brothers’ clear connection, and watch them grow up to found and run an eponymous company: Kavanaugh & Kavanaugh. One day, they are simultaneously struck with “an idea of global proportions” to take their business to the next level, and we see how Dell tablets enable them to keep both their personal and business connections strong - by allowing them to do everything from challenge each other in virtual chess to sign important contracts, even during a blackout in one of their offices. “Tenacity and technology” have kept them cosmically connected “across 7,809 miles” to bring them success.

Though “Brothers” speaks more directly to business decision makers, this new work continues along the storytelling vein that made Y&R New York’s previous ads for Dell - “Annie” and “Thomas” - so popular. Although the current protagonists have switched from a persistent fifth-grader and an imaginative commuter to actual entrepreneurs, the idea of achievement for dreamers is still the main focus.

Launching in :60 and :30 formats on February 1 on national network TV, cable and YouTube, the :30 spot will also air during the Sochi Olympics broadcast, as will the recently launched “Beginnings.”