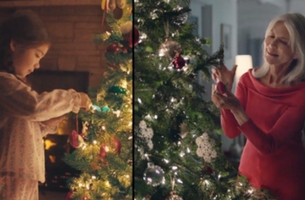 Creative production company DECON spans a touching life well lived with A+E Networks for the Lifetime 35th anniversary hallmark, directed by the directing team JEAN. Known for their story-driven spots, JEAN crafts an intriguing two-panel perspective that lays bare one women’s life of emotional highs, lows and self-discoveries, showcasing every pivotal moment that shapes a life from start to finish.

The spot at once reads as the beginning of a story and a reflection of a full life lived. In the spot’s left-hand screen, a young woman grows from infancy, through moments of light-hearted holidays and play, teenage trials and common insecurities felt when facing the world head-on for the first time.

In poignant juxtaposition, on the right-hand scene, an elderly wizened woman relives memories of first and lost loves, grandchildren, a conquered career and the confidence of adulthood.

The two timelines ultimately meet in the middle and pan to one middle-aged character, a woman that has lived so much but still has so much left to discover

JEAN is no stranger to Lifetime Movie Network and A+E networks, having helmed the summertime Lifetime comedy spot “School,” which enacts a tongue-in-cheek tryst between a teacher and student, and “Hospital,” where a mother contemplates switching her newborn screamer with a calmer infant, as part of the “leave the crazy to us” campaign. “Hospital” additionally won the 2017 Bronze Clio in Channel/Network Branding. JEAN has worked with other top clients beyond Lifetime, including Honda, Glenfidditch and Delta, among others.