Black has directed projects for brands including Gap, Absolut, Playtex and Cadillac 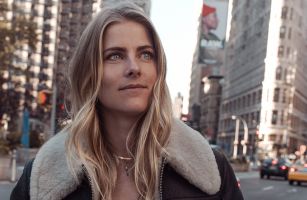 Creative production company DECON has signed director Van Black for US commercial representation. The New York-based filmmaker, photographer and multimedia artist’s cinematic storytelling delicately captures the nuances of life, celebrating people as everyday heroes in her work spanning commercial, episodic series, long form narratives and interactive media projects. She brings a unique cultural perspective and authenticity to projects for brands such as Gap, Absolut, Playtex and Cadillac. Her 'Be a Witness: VIACOM x Witness' projection mapping project earned a 2016 PromaxBDA Award for ‘Best PSA Campaign.’ Known for putting an unexpected spin on classic archetypes, Black combines a fascination with personal stories and surrealism in everyday life to challenge and re-examine popular viewpoints of the world. Most recently, she worked with New York-based agency YARD on a newly released Athleta campaign featuring a group of cancer survivors who have found community, belonging, and renewed hope through their crew team.

"Van has her hands on so many types of projects and has really been able to team up with some incredible people, agencies, and brands to tell powerful stories in many mediums that somehow are weighty and important while still managing to find that thread of entertainment and lightness,” notes DECON Executive Producer Misha Louy.

“Mike [Lobikis, Head of Strategy & Development] and I looked at each other during our first pitch meeting with her and we knew we needed her on the DECON roster for not only commercial work, but experiences and overall creative representation. This is a human being with super powers waiting to be unearthed by the right group of people with the right opportunity."

Adds Black, “DECON has a fun and creative atmosphere and they really have their finger on the pulse of what is interesting. I’m pumped to be a part of such a young, culture-driven company that just gets it and also extends their reach to music, long form and documentary projects outside of commercials.”

Beyond branded work, Black has helmed a myriad of cause-driven projects under her own banner, BLKFLM, working with the likes of Al Gore, The United Nations, UNICEF, Appian Way and teen activist Xiuhtezcatl Martinez along with scores of passion projects, including conflict journalism during events such as the Ukrainian Revolution. Leveraging a counterculture lens to examine politics, Black’s work has earned widespread media recognition, landing in such top publications as National Geographic, CNN, VICE, Rolling Stone, HuffPost, Esquire, Mic, Upworthy, Refinery29, Teen Vogue, i-D Magazine, BuzzFeed, MSNBC, The Guardian, BBC and more. A lifelong storyteller, Black holds a B.A. in Film Production from the University of Southern California’s prestigious School of Cinematic Arts.