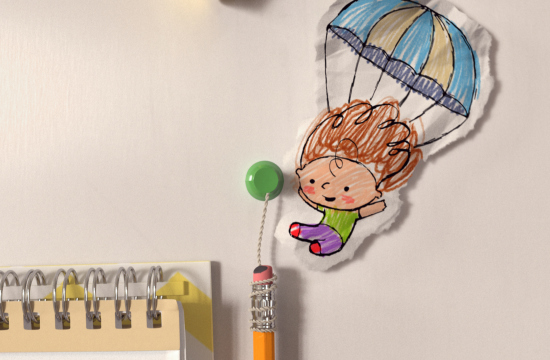 The most recent work from FSM dives straight into the magical world of a child’s imagination. The animated spot for Aspen’s S26 Gold Junior formula via DDB tracks the transformation of a drawing into a real adventure.

Following the journey of cute toddler Abi, the TVC brings a picture on the family’s fridge to life as she travels through the world of fridge magnets, drawings, postcards and even a cocktail umbrella.

FSM creative director Emile Rademeyer said bringing Abi’s imaginings to the screen was a true collaboration. “We drew on the illustration skills of Phil Meatchem for the character design and joined with Kelly Baigent and his team at Tui Studios for traditional 2D animation.”

Key to the brief was to realise the characters through authentic individual traits. Co-creative director Andreas Wanda said FSM’s treatment had been unique. “It was traditional 2D animation married with 3D animation,” he said. “Each technique was dependent upon the other, resulting in a distinctive visual style.”

All props were designed and handcrafted by FSM designer Melissa Mai. Sculpted from Fimo clay, baked in FSM’s kitchen oven and painted by hand, the props were used in the live action component before heading to the 3D team to create matching CG models.

2D animation was combined with an animated paper tear, creating the impression that each drawing of Abi was individually illustrated and torn out with frayed edges and all. Each frame of Abi was then individually coloured-in frame by frame. The torn-out artwork of was then projected on to 3D animation of the CG paper bending and twisting as it mimics the realistic movement of a child’s hopping, skipping and jumping.

Executive producer, Dave Kelly said the job was a great follow on from Emile and Andreas’ work directing the latest Coco Pops campaign. “The DDB ad for S26 was another great opportunity to showcase their skills,” he said. “As co-directors specialising each in design and 3D, they were able to realise the agency’s great script and create a beautifully designed and lively animated piece.”