DDB NZ's Fargo-inspired Woollen Collection is to Die For 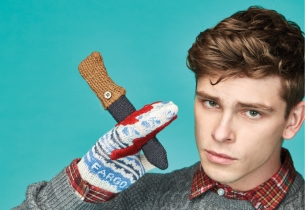 DDB NZ has teamed up with one of New Zealand’s leading knitwear and textile designers to create the ‘Fargo Woollens’ clothing range to celebrate the second season of FX’s black comedy-drama Fargo, streaming express on NEON.

Remar Knitwear and the Textile Collective have been commissioned to create a range of knitted merino items including jerseys, beanies and mittens – all inspired by the show’s theme ‘A lovely place to get murdered’.

The collection has been carefully curated to reflect everyday life in the critically acclaimed show's frozen north, a place where lovely manners and beautiful surroundings go hand in hand with intrigue, murder and casual body dismemberment.

As with all killer fashion lines, the collection was launched with a fashion shoot, giving the industry elite and bloggers alike a sneak peek at the new offerings. Gruesome garments on show included the Classic Fatality Knit, the Family Matters Crew Neck, New in Town Beanie and the Ouch Mittens.

Nine exclusive designs have been fashioned which NEON GM, Dave Joyce, says reflects the only thing more unforgiving than Fargo’s brisk climate - its murderous residents."What better way to acknowledge Fargo’s return than with a range of garments that celebrate the character’s lives in Luverne, Minnesota. Just like the show, they’re super nice on one hand, while mind-numbingly brutal on the other,” he says.

“While they all come with the lovely patterns you’d expect in a quaint winter town, they also have a unique customised wound – something that might just get some longin’ looks when you’re popping down the dairy, you betcha,” says Joyce.

DDB Executive Creative Director Shane Bradnick believes fans of the show will go postal for the knitwear range. “A place with such gruesome sweaters and ugly murders definitely needs its own fashion line. Fargo has developed a cult following over the last season with fans engaging with the show beyond just the episodes. The Fargo Woollens collection felt like a fresh way to get people excited and talking about the new season,” says Bradnick.

DDB Chief Creative Officer Damon Stapleton says the killer fashion range exquisitely captures the essence of the murderous town. “Fargo is basically about two things; politeness and murder. All we did was add a little fashion. What you end up with is a catalogue of beautifully knitted jumpers full of blood and gore. Perfect.’