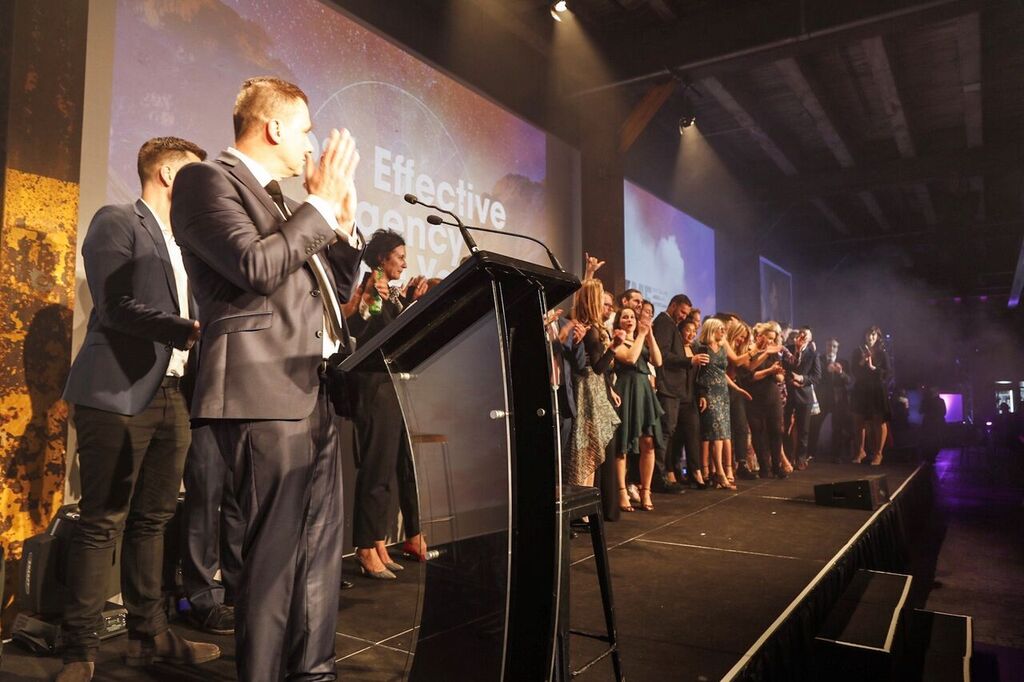 New Zealand's advertising and marketing industry professionals gathered at Shed 10 in Auckland last night to recognise and celebrate the country's most effective marketing campaigns at the 2018 NZ Effie Awards, organised by the Commercial Communications Council in association with TVNZ.

MC Pax Assadi presided over the evening, which was themed 'The EFFIE Effect' - a reference to the fact that winning an Effie has a positive effect for both agencies and their clients. The Effie Awards has been run by the Comms Council in NZ for 16 years and with more than 50 Effie programmes around the world, winning an Effie is recognised globally by advertisers and agencies as the industry's pre-eminent award, representing the pinnacle in advertising effectiveness.

Of the 17 Golds awarded on the night, DDB New Zealand won 8 of them for its work with two clients. The 'The World's Most Unhelpful Chatbot' campaign with Netsafe won 5, including Limited Budget, Best Strategic Thinking, and Most Progressive Campaign.  Netsafe was also awarded Most Effective Client of the Year. DDB Group's gold

run continued with two Golds for the 'Imagine' campaign for Lotto New Zealand, with Lotto NZ "Imagine" also winning the major prize of the night, the coveted Grand Effie. With the haul of golds, DDB Group were also crowned Most Effective Agency of the Year.
Says Justin Mowday, CEO, DDB NZ: "We're really proud to have been recognised as the most effective agency in NZ. We tell our clients that our business is to grow their business, so this recognition is testament to that commitment. We're grateful to have fantastic clients that share that belief and who've backed us to deliver innovative campaigns, that have now gone on to deliver tangible business results. It's particularly satisfying to see a wide range of our clients, five in total, recognised at Effies.

"I also want to call out the 200 plus exceptional people across the DDB Group who have had an outstanding year. You're producing work that would hold up anywhere in the world and you deserve to be very, very proud."

David McIndoe, head of strategy at Saatchi & Saatchi and Effie's convenor for 2018, says those entries deserving of an Effie illustrate the deep connections that brands can make with consumers when the minds of agency and client are aligned.
Says McIndoe: "Brands and the ideas that power them are business assets. To be effective, a vision needs to be built and deliberately maintained, jealously guarded, and leveraged with care. The value of being truly effective will pay back over many years to come. Tonight, we celebrate world-class thinking from New Zealand."

the Hardest Challenge by the exec judges.

Ogilvy also got to walk up the purple carpet for Gold in both PR/Experiential and most Effective Social category for the NZ Police's 'Most Entertaining Recruitment Video'.  PHD wore the carpet out collecting three Golds for Skinny's "Best Freekend weekend ever" in Consumer Services, Integrated and the new category, Short-Term Success.  PHD also picked up a couple of Silvers for its work around the election with MediaWorks.
Says Regan Grafton, chief creative officer, Ogilvy about the NZ Police campaign: "It's great to be recognised for a campaign that is truly making a difference to New Zealand. We feel very privileged to work with such a trusting and progressive client as New Zealand Police."

Launched in late November 2017, the campaign was designed to attract a more diverse variety of applicants to the New Zealand Police industry.
Within a week of its release, it reached 91.8 million people, saw a month's worth of enquiries in the first 24 hours, was the number 1 trending video on YouTube and Facebook, received a 31,422% return on media spend and saw an 898% increase of visits to newcops.co.nz. But most importantly it saw a 615% increase in diverse profiles created, and the largest number of female recruits, ever.
Says Helen Flannery, senior marketing advisor, NZ Police: "New Zealand Police are ecstatic to have been honoured with a number of Effie Awards for 'World's Most Successful Recruitment Video. We have a strong collaborative partnership with our agency Ogilvy and together we have delivered a recruitment campaign like no other. 2017/2018 provided the highest number of applications to join New Zealand Police ever."

TRACK got to take the stage with their data focused work "Playback" for Westpac winning a Gold; and BC&F Dentsu had a lot to celebrate with 1 Gold in Limited Budget and 3 Silvers for the most likeable campaign Movember - The Face of Change.

Saatchi & Saatchi got a well-deserved Gold for its follow-on campaign for Bay Audiology.

Rachel Ellerm, GM marketing at Goodman Fielder, won the most Effective Marketer of the Year Award for 2018. This award recognises a marketing client who led their agencies in the

marketing of a brand that has clearly excelled in the last 12 months and beyond - someone who really understood their business issues, had clear objectives and inspired their agencies to even greater heights over the longer term.

The Comms Council CEO, Paul Head, said Marketer of the Year for 2018 recognises someone that has demonstrated authentic, values-based leadership in a very tough FMCG sector.
Says Head: "Rachel had clearly created a

step-change in ways of working with agency partners across 13 brands and 28 segments. Despite relatively small budgets, this led not only to award winning campaigns but to strong volume growth across all supported brands, underpinned by a mantra of "up the brave" which challenged both their organisation and their agency partners to push boundaries."
The Commercial Communications Council congratulates all the finalists and winners at the 2018 Effie Awards 2018 in association with TVNZ.

Gold entry papers will be online at www.commscouncil.nz next week.
VIEW THE FULL LIST OF WINNERS - 2018 Effie Winners.pdf
view more - Awards and Events