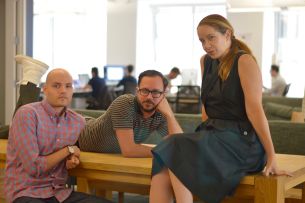 DDB Worldwide today announced the addition of Chris Klein and Alan Leber to the agency’s production department in New York, effective immediately. Both Leber and Klein join DDB New York as executive producers, in which roles they will be responsible for championing the production of multidisciplinary concepts across their brands’ creative output.

The arrival of Klein and Leber supports the shift in structure that DDB New York’s production department has been undergoing over the past year. Led by Madison Wharton, DDB NY’s Chief Production Officer, the department has shifted to a multidisciplinary, integrated production model. This shift was a linchpin for the agency’s newly defined processes and a necessary step in delivering on ideas that live at the intersection of data, creativity and technology.

Wharton commented, “We are creating a production team of cross-athletes, and Chris and Alan’s arrival adds additional depth and breadth to the department. Whether it be creating long-form choreographed films like #CoolerInCotton or quickly developing customized dog ear muffs for State Farm, our producers have to be able to switch gears at a moment’s notice. Chris and Alan’s expertise and craftsmanship build upon our promise to deliver a multifaceted production team.”

Klein joins DDB New York as Executive Producer on the Time Warner Cable and Johnson & Johnson Beauty accounts. Prior to joining DDB, he worked for eight years at J. Walter Thompson and oversaw production for a range of clients, including Rolex, Puma, Royal Caribbean, and many Nestlé and J&J brands. During that time, he picked up awards from Cannes, The Art Directors Club and the AICP.

Prior to his work with Love & War, Leber led production teams at The Barbarian Group for Samsung, and at Etihad Airways, which included responsibility for maintenance, content creation, and strategic planning for Samsung’s U.S. flagship website, in addition to iconic product launches and high-profile campaigns.