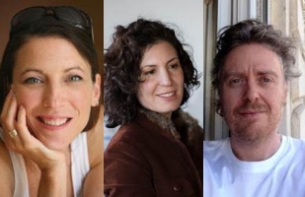 “These are exciting times at DDB New York as we continue to build a strong creative team with diverse backgrounds and capabilities,” said Doria. “Hannah has done a brilliant job driving the creative agenda of Clean & Clear in the US and globally; Cheryl is a game changer with a passion for emerging tech and healthcare; and Cam’s outstanding creative leadership is evidenced by his time spent at DDB Sydney where he oversaw creative for some of Australia’s biggest and most iconic brands.”

Hannah joined DDB New York one year ago in January of 2015. She has served as Global Group Creative Director on Johnson & Johnson beauty brands like Clean&Clear. Most recently, she led Clean&Clear's #SelfAcceptanceSpeech campaign for MTV’s Video Music Awards.

Prior to DDB, Hannah was VP, Creative Director at Edelman Digital for seven years where she led the creative on brands like Samsung, Dove and the American Heart Association. Prior to Edelman, she held creative positions at Everyday Health, Borders Books and Chrysler.

In her new role, she will oversee the creative globally and locally for Electrolux and Frigidaire, and will continue to lead the creative on the agency's Johnson & Johnson beauty brands. Most recently Fishman has been named a 2016 Cynopsis Top Women in Digital honoree.

Australian-born Hoelter joins the New York team from DDB Sydney where he was the multi-award winning Deputy ECD working on many of DDB Sydney’s largest clients including McDonald’s and Volkswagen Commercial Vehicles. During this time, Hoelter was instrumental in winning eight Cannes Lions, three of which were gold.

Prior to joining DDB Sydney, Hoelter spent time at Clemenger BBDO in Sydney and Melbourne, as well as The Campaign Palace in Sydney, where he created some of Australia's most loved campaigns and helped build some of the world's most iconic brands including Pure Blonde, Hahn Premium Light, Bonds, NAB, Panasonic, Lumix, Sorbent, Libra, Twisties, Mercedes-Benz and Westpac.

He is also the recipient of a host of other international and national awards, including The One Show, Clios, D&AD and Spikes. In 2013, Hoelter represented Australia on the Cannes Lions Press Jury, and has been a jury member of numerous other national and international awards like Adfest Asia, New York Festivals, Brisbane Advertising Awards (Chairman), and acting Jury Chairman of the The AWARD (Australasian Writers and Art Directors Association).

She especially enjoys working with and developing new/emerging technology, serving on the Advisory Board for SXSW. As a VP/Group Creative Director at Digitas Health she was the creative lead on Pfizer’s Women’s Health, where she helped sell in the concept of an unbranded social platform complete with open space for postmenopausal women to share experiences, educate one another, and offer support.

Horsfall’s strong held belief in healthcare work improving the lives and longevity of consumers feeds her drive for working in advertising.