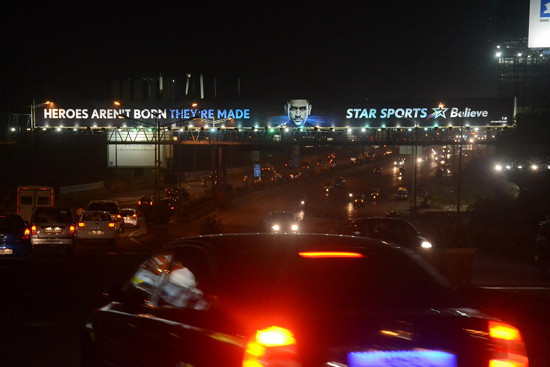 STAR India recently revamped the branding of the sports network and unveiled a new brand for Star Sports across six channels — Star Sports 1, 2, 3, 4, HD1 and HD2 and starsports.com. The brand refresh highlighted Star Network’s ambition to change the face of sports broadcasting in India and provide world-class sports coverage. To signal the change to the consumer, Star India brought all the six diverse TV channels under one brand – Star Sports and one purpose – ‘Believe’.

Star Sports partnered with DDB MudraMax OOH to create the awareness and buzz for the new brand identity and to communicate the new brand philosophy – Believe, through a high impact OOH campaign. The campaign was rolled out when India tuned in to watch Sachin Tendulkar play the last series of his sports career. The new brand identity of STAR Sports is a metallic star with an explosive incandescent swoosh symbolising the authority and passion of sports.

The massive OOH campaign was executed in Mumbai, Delhi and Kolkata as well as across major cities in Gujarat and UP. The campaign used multiple visuals of Mahendra Singh Dhoni as well as the brand logo as part of the campaign creative. The visuals, layouts and colors were used in sync to create OOH friendly creatives. The goal was to portray the premium nature and scale of the campaign.

Gayatri Yadav, Executive Vice President Marketing & Communications, STAR India, said, “The work done by DDB MudraMax OOH for the brand refresh campaign has been outstanding. The DNA and essence of the brand refresh was well understood and reflected in the manner in which the planning and media selection was done by the agency. Especially the Star Sports zone and roadblocks conceptualized and executed at Mumbai and Delhi airports are noteworthy and have created a great impact and buzz for the refresh. We are very impressed with the positive reviews received for the campaign. DDB MudraMax has delivered on our expectations yet again.” 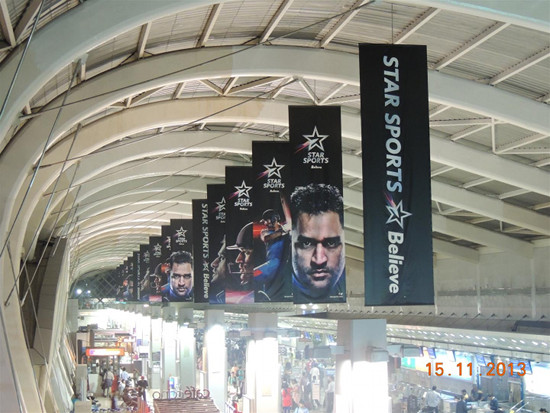 Commenting on this Mandeep Malhotra, President, OOH, Retail and Experiential, DDB MudraMax said, “Sport is very close to my heart and when the opportunity to associate with a brand standing tall to the passion came up, was really thrilled to create magic. The team did a wonderful job on picking up unusual formats of advertising. Various touch points were exploited and the new identity made it to top of mind recall with a smooth transition.”

Spencer Noronha, VP, DDB MudraMax OOH said, “Star Sports aimed at starting a revolution in sports broadcasting and the media strategy was to amplify this sports revolution through an occasion that is relevant to all and thus inspire every Indian sports fan. This soul of this campaign was “premium and classy” and hence it was crucial that the media selection had to be in line with that imagery. We selected the most impactful, most premium and the largest of available media vehicles in each of the target cities to create a statement in the OOH space. The quality of the selected media reflected class and helped the campaign to quickly get noticed and talked about. The eye catching creatives amplified the impact and recall manifold. It’s definitely one of the most memorable OOH campaigns in 2013”

Anirudha Pawar, DGM, DDB MudraMax OOH said, "OOH is a communication platform where the brand is racing against time to grab attention and communicate with the TG while he zooms past the media within a few seconds. This makes it all the more important for the brand to use the right media mix and deploy an optimized communication tailor made for the medium. We exactly did this for the refresh campaign. The media vehicles were meticulously handpicked to project class; and the creatives were kept ultra outdoor friendly to specifically communicate the grandeur of the brand. We took the innovative branding route by creating the Star Sports Zone, Stadium visibility corridors and airport roadblocks, to ensure each and every person exposed to the communication carried a positive image of the brand with him in this mind. I am sure we have succeeded doing that."

A multimedia approach was used for the campaign. Large format A+ grade billboards and Unipoles, Backlit Bus Shelters, Backlit Pole Kiosks, 4 Sided Backlit Pillars, Large Backlit Glow signs, Drape, Prominent Mall Facades, Digital Screens at airports and Gantries were meticulously selected at key touch points in each city. The creatives were optimized for each of the media formats used. DDB MudraMax also brought in a couple of significant planning and media innovations to help portray the grandeur of the brand refresh and garner high recall value for the campaign. Visual domination was the key.
The planning and media innovations used for the campaign were:

Star Sports Zone @ Mumbai Airport – A new branding element was created especially for the refresh campaign. There are huge pillars in the departure check-in hall at the Mumbai airport which is visible to everyone going towards the Security Hold Area. 5 pillars on each side. A composite visual was put across the pillars on both sides – Each set of 5 pillars forming a complete creative.  This formed the Star Sports Zone. Any one approaching the zone could not miss it. A huge head-on panel at the end of the zone announced the new brand philosophy and the dynamic channel line up. Star Sports became the first mover creating a new branding element relevant to the essence of the campaign – impact and domination.

Road blocks @ Mumbai & Delhi Airport – It is possible for a brand to go unnoticed at busy airports like Mumbai and Delhi. The only solution for being noticed here – dominate! DDB MudraMax created high decibel road blocks at Mumbai and Delhi airports for the refresh campaign taking up every media unit and digital screen available. The sheer numbers and placement of the branding elements was a spectacle in itself. More than 200 exposures were created at the airports making it impossible for anyone travelling to miss the brand.

Media Corridors at Kolkata and Mumbai – The first and the last matches of the India West Indies series were specially targeted considering the huge crowd pull they were expected to generate. High visibility multi-media corridors were created on the approach roads to Eden Gardens and Wankhede stadiums. Every available impactful media vehicle – billboards, gantries, pole kiosks, bus shelters, etc was taken up for the campaign creating high OTS and recall value for the brand.

Backlit Billboard and Rotating Display Units at Mahim Causeway – Special installations were created at the innovation hot spot of Mumbai – Mahim Causeway.  The objective was to highlight the new brand logo. Huge 3 Sided Rotating Backlit units were placed at the Mahim – Bandra Junction Island which stood out at night. Apart from these units, the iconic Mahim Causeway set of 3 billboards were taken up and the middle billboard was converted to a backlit. A special print technology was used to highlight the Star Sports logo once the billboard lit up in the night. The sight was a must watch during the night especially considering the fact that one rarely sees an entire 40x20 billboard being converted to a backlit unit for a campaign!