In the lead up to the Cricket World Cup 2015 season 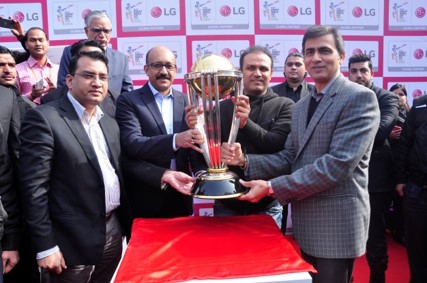 Being the official sponsor of the ICC World Cup 2015, LG wanted to rejig the kindling zeal of Cricket amongst the Indians before the inception of the World Cup 2015 season.

A big ticket event like ICC World Cup 2015 needed a bigger show; a larger than life spectacle to further raise the cricket zealots. Hence, DDB MudraMax- Experiential came up with the idea of the ‘signature bat campaign’.

A gigantic bat (26’(W)x5’(H)x2.25’(D)) was created for all the cricket lovers to write their wishes for their favourite teams. Further the bat was stalled at strategic locations across Hyderabad, Mumbai, Delhi, Gurgaon and Noida along with the ICC World Cup Cricket Trophy which was kept on display for the spectators.

With its sheer size alone, the bat encouraged audiences to get thinking about an opportunity to send personal good wishes and messages to their favourite team. The original World Cup trophy being on display brought back the nostalgia of winning the World Cup last time and geared up the audience to cheer India to win it back this year. 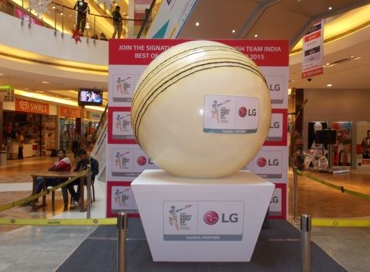 The word about the ‘signature bat campaign’ spread soon with the Mumbai location alone experiencing a footfall of over 50,000 audience to see the bat. The campaign was a success as more than 2, 500 audience from across cities signed on the bats and wished their team. The zeal multiplied with the presence of famous Indian cricketer Virendra Sehwag who addressed his fans at Gurgaon and Noida.

Mr. Niladri Datta, head of corporate marketing, LG Electronics India said: “We are extremely proud to be the official global partners of ICC for all these years and to be a part of 2015’s biggest sporting spectacle, the ICC Cricket World Cup 2015."

"Indians are one of the biggest followers of Cricket across the world and it gives us immense pleasure and delight to offer our consumers and cricket lovers an opportunity to experience the trophy in person and share their good wishes with the Indian team through the Big Bat ceremony arranged across five cities. With this activity, LG brought the game closer to the cricket fans and gave them a platform to share their wishes directly to their favorite team.”

Mandeep Malhotra, president, DDB MudraMax said: “Cricket still remains the one unified religion of our country. Making the signature bat for seeking well wishes for the teams across the country was a brilliant idea, requiring operational excellence."

"We are glad that our campaign garnered lot of awareness and buzz right before the World Cup 2015. I believe that this campaign was quite instrumental to set the momentum rolling for the cricket season,” he added.