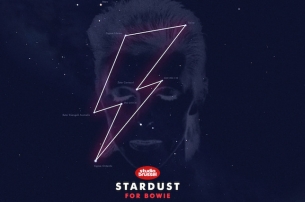 During his long career, David Bowie knew some great loves. One of his greatest inspirations was undoubtedly the universe. Bowie had a special fondness for everything that had to do with the universe. Ziggy Stardust, the album that was both commercially and artistically one of his greatest achievements, even characterized him as an extra-terrestrial rock star.

Studio Brussels wanted to give David Bowie a fitting tribute: his own constellation. Along with public observatory MIRA, Studio Brussel registered seven stars in the form of Bowie’s iconic thunderbolt. Bowie takes on a symbolic place alongside the 88 existing constellations.

"It was not easy to determine the appropriate stars," says Philippe Mollet from MIRA. "Studio Brussels asked us to give Bowie a unique place in the galaxy. Referring to his various albums, we chose seven stars - Sigma Librae, Spica, Alpha Virginis, Zeta Centauri, SAA 204 132, and the Beta Sigma Octantis Trianguli Australis - in the vicinity of Mars. The constellation is a copy of the iconic Bowie lightning bolt and was recorded at the exact time of his death. "

The homage to the 'Starman' is linked to an online action "Stardust for Bowie" developed on Google Sky. Listeners and fans of Bowie can create a personal tribute in the Bowie constellation on www.stardustforbowie.be. Each visitor may assign a favourite song and leave a short personal text in the shape of a star.

“Disruptors at Heart”: How DDB FTW’s Creativity Is in the Game, around the Game, and of the Game