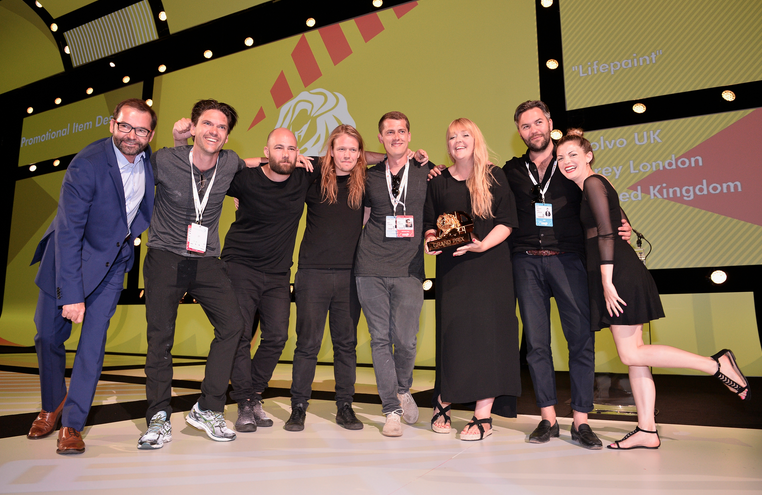 Lions from four more entry sections were announced by the Cannes Lions International Festival of Creativity. The winners further asserted that a leading theme in this year’s work is brand-aligned ideas that affect societal change and drive business - simultaneously.

In Design, 79 Lions were awarded, including the second Grand Prix of the week to Grey London for Volvo UK, “Lifepaint”. Jury President, Andy Payne, Global Chief Creative Officer, Interbrand, said the work impacted culture, had the potential for greater scale, was tied to brand purpose and went to the heart of the problem-solving role of design. “Our job is to make things better,” he said. “Understand the status quo, challenge the status quo, change the status quo. That’s what design is.”

Echoing the theme of empowering diversity that has been an undercurrent of the Festival so far, the Cyber Grand Prix went to Droga5 New York for Under Armour, “Gisele Bundchen - I Will What I Want”. Jury President Jean Lin, Global Chief Executive Officer, Isobar, described it as an example of how a powerful brand narrative enabled by technology could thrive in multi-screen digital environment that is social by nature and real-time by design. “It demonstrates how well-crafted digital experiences create the uplifting impact to bring a brand closer to its people, from the point of engagement to the point of transaction. It demonstrates how real-time data enhances creativity and tells a beautiful human story to empower its audience.”

In Product Design, Jury President Dan Formosa highlighted their Grand Prix, ‘The Lucky Iron Fish Project’ from Geometry Global, Dubai, as an example of the wave of “bottom-up thinking” that had returned product design to its roots in user-experience. “Cannes Lions contains outstanding examples of our ability to use high-tech tools to output the best in creative video, digital and print. Yet at the basis, what really makes it work, is our ability to understand people and to communicate. The fact that the Product Design jury selected a low-tech product, using a manufacturing process that has been in place for centuries, in the end, surprised even us. Yet, we were unanimous in our decision.”

Fifty-eight Radio Lions were announced in Radio and Grey Germany Dusseldorf/Grey Germany Berlin collected the Grand Prix for SoundCloud, “The Berlin Wall of Sound – The Most Unbearable Radio Ad”. Jury President Paul Reardon, Executive Creative Director, WHYBIN /TBWA Group Australia said the harrowing memorial work did not make for an easy listening experience. “In some ways it was more like walking through an audio museum than listening to a spot. It's macabre. It's somber. It's uncomfortable. It's 7 minutes and 32 seconds long. But conversations surrounding traditional radio, the rise of new radio and audio platforms are making headlines every second week. So strategically, the timing is perfect. As is the historical timing of the subject matter.”

SY Lau, Senior Executive Vice President of Tencent, President of its Online Media Group, was also honoured on stage tonight as the Cannes Lions Media Person of the Year. Terry Savage, Chairman, Lions Festivals said that SY Lau’s “foresight and vision had contributed to a journey that had built Tencent into the largest integrated internet service company in Asia."

Cannes Lions believes in and champions creativity as a force for change and, following last night’s announcement of the first-ever Glass Lions and Glass Grand Prix, Festival delegates are now helping to “give back” proceeds from entries. Delegates can go to inpactcode.com/glasslion, enter their badge number, select one of ten causes for gender equality and donate €10 from the total fund.

This year, programme content also reflects the theme of using creativity to make a lasting, positive impact on humanity. Christiane Amanpour and Julia Louis-Dreyfus discussed how political satire can influence policy andand filmmaker and humanitarian Richard Curtis and Sir John Hegarty were joined by actors Freida Pinto and Chiwetel Ejiofor to share experiences of how cinema can create waves for social change.